Book Review: Let the Wrong Light In by Avon Gale 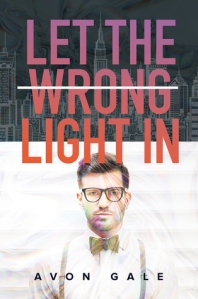 Blurb:  Avery Hextall, a junior architect at a prestigious firm, is thrilled when his design is chosen for a new performing-arts center—even if it means working closely with his insufferably uptight project manager, Malin Lacroix. When a chance encounter in the boss’s office proves that Lacroix is anything but cold, Avery is determined to learn more about the real man beneath the aloof veneer.

Despite their growing attraction and their increasingly kinky encounters, the enigmatic Malin remains as emotionally distant as ever. Worse, Avery’s friends are convinced Malin thinks of Avery as a dirty secret and nothing more—a secret that might destroy both of their careers.

But the real secret is a single moment in time that haunts Malin and keeps him from committing to the life he wants with Avery. In order to move on, Avery must help Malin come to terms with the tragedy in his past before they can work on building a future together.

Review:   Want a book that’s a little hardcore, yet funny and really sexy at the same time?  This one definitely fits the bill.

Avery is a junior architect who just can’t seem to get any of his plans accepted by the project manager.  He’s a funny guy with a great snarky sense of humor who hasn’t had time for relationships, dedicating his life to his career.  He gets by with hookups and enjoys sex benefits with his best friend, Harlan.  His boss, Malin, the evil project manager who doesn’t seem to care much for Avery at all, is quite a mystery, and remains so through much of this story.  His treatment of Avery really hits some buttons, and Avery just can’t seem to resist wanting what he can’t or shouldn’t have.

Avery pushes, and Malin responds, which pushes Avery even more.  It’s hard to describe what these two have going on.  It’s rather explosive.  Malin’s never been with a man before, let alone one coming on as strong as Avery, especially one who asks for the things Avery wants.  But he gives it all and then some.  Neither has any experience with the activities they are choosing, so both are kind of winging it.  It’s a bit troubling in that neither is really aware where the lines are.  Avery allows things to happen because he doesn’t want things to end, and Malin gives the impression he will walk away at any moment.  He is not happy with Malin, nor is he happy without him.  It’s a bad situation and one Avery’s friends are quite concerned about as well.  They try to guide Avery and make him realize he is not in any type of healthy relationship, but Avery is pretty stubborn.

Malin comes across as quite a jerk, but there are reasons for his behavior, and thankfully, we get to learn a bit more about his background once Avery finally does stand up for himself.  When these two finally allow things to become more than the initial crazy hookups, they are really hot stuff.

There are some great side characters here as well.  Harlan, Avery’s bff w/benefits, cuts Avery off once he realizes Avery has his sights set on Malin, but he never falters in his support and offers advice and a shoulder whenever needed.  Then, there is his co-worker, Brandon, whom he initially dislikes but who ends up becoming quite a good friend, along with his bf, Justin.

This story grabbed me from the get go, and even though I wasn’t sure where it was going or how it was going to possibly work, I couldn’t turn the pages fast enough.  I was on the edge of my seat to see what would happen next.  Then, once we did know, I didn’t want it to end.  I really liked what these guys ended up having together and seeing their journey.  It was a really interesting change from the typical BDSM type relationships, even if it wasn’t always in a positive direction.  I really hope we get to see more of these guys at some point and definitely can’t wait to see what Ms. Gale comes up with next.

Overall Impression:  I loved it

One thought on “Book Review: Let the Wrong Light In by Avon Gale”