Posted on October 10, 2015 by thebloggergirls 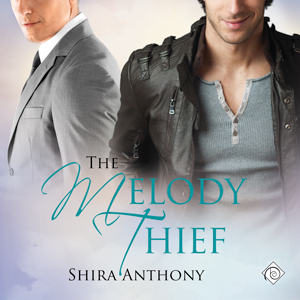 Blurb: Cary Redding is a walking contradiction. On the surface he’s a renowned cellist, sought after by conductors the world over. Underneath, he’s a troubled man flirting with addictions to alcohol and anonymous sex. The reason for the discord? Cary knows he’s a liar, a cheat. He’s the melody thief.

Cary manages his double life just fine until he gets mugged on a deserted Milan street. Things look grim until handsome lawyer Antonio Bianchi steps in and saves his life. When Antonio offers something foreign to Cary—romance—Cary doesn’t know what to do. But then things get even more complicated. For one thing, Antonio has a six-year-old son. For another, Cary has to confess about his alter ego and hope Antonio forgives him.

Just when Cary thinks he’s figured it all out, past and present collide and he is forced to choose between the family he wanted as a boy and the one he has come to love as a man.

Review – Book: Carey is a cellist with amazing talent. His has no father to speak of and a mother who pushed him hard until the day she died. He lost his childhood to practicing and being the best he could and now that he’s an adult he wants to be free. He still loves his music and works hard at it, but when he’s not on stage he’s wild.

He runs into Antonio one night in a bar and the two hook up – sort-of. Antonio knows who he is, but lets Carey “fool him” with an alternate identity. Essentially giving him enough rope to hang himself.

Antonio is both Carey’s salvation and hope for the future. He helps him to settle down and become the man he can be, but he also adores and loves him.

Only the first 50% of this is Carey and Antonio getting to know one another. They fairly quickly realize they love one another and move in together. The rest of the book is dealing with the ghosts from Carey’s past and dealing with being in a relationship as adults when one travels more than he’s home.

Review – Audio: Peter B Brooke did an amazing job with this narration. He has a gift with accents and Antonio’s is to die for. Even little Massi’s voice is done well. I thoroughly enjoyed the story as told by Peter, and even though it did drag through the middle, his narration breathed life into it.