Posted on October 11, 2015 by thebloggergirls 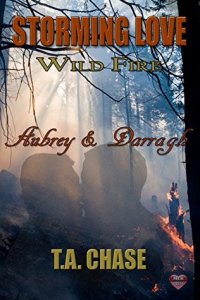 Blurb:  Aubrey Rabinstern is prepared for the wildfires sweeping across the land around his house. He’s even accepted the fact he’ll lose his home. But Aubrey doesn’t expect to find a man he can love in the midst of the ashes left behind.

Darragh O’Flannery never thinks he’ll meet a man like Aubrey Rabinstern while fighting the wildfires destroying acres of land and homes. Yet in the middle of the chaos, he and Aubrey forge a connection. Can it withstand the normality of life once the fires are put out?

Review: Aubrey is a vet tech who moved back to his hometown because San Francisco was too busy for him. He likes his new little house and his new life so he’s sad but not devastated when the wild fires look to take his house away.

Darragh fights fires. He meets Aubrey and likes him. He also rescues cats and when he takes the latest rescue to the vet he runs into Aubrey again, they decide to date.

I didn’t really understand this book. It felt like only a part of a book and perhaps there is more coming? The two MCs are only about to go on their first date at the end of the book, so I can’t really say how they’ll be as a couple.

It has potential if there’s more, but if this is it, there isn’t much to sink your teeth into. There was no angst, no tension, only a little plot development…

Aubrey seems nice, but we don’t know much about him. Darragh also seems nice, but again, there isn’t much to know. I liked that they had the pet thing in common, but for them to decide to build a house together based on a few texts, a couple brief personal contacts and some phone calls? I’m not really sure I can get behind it.

Based on this as a stand alone, I can’t recommend it, but I’m willing to re-visit this if there ends up being more to the story.

Overall Impression: It was okay, but not good