Posted on October 27, 2015 by thebloggergirls 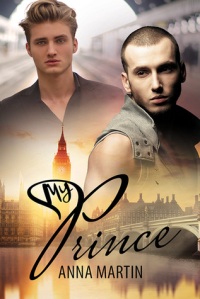 Blurb: After growing up in a rough part of town, George Maguire worked his way out of Manchester and to a career as a design engineer. Alexander van Amsberg, an architecture student at the University of Edinburgh, wasn’t the sort of guy he normally had explosive, hotel-room one-night-stands with. Alex was charming, classy, and, as George later learns, Prince of the Netherlands.

Fate brings them together again, and Alex makes sure to get his sexy stranger’s phone number this time. Despite all the reasons why they shouldn’t work, something clicks, and Alex thinks that this time, he might have found the right guy. But Alex’s aristocratic ex stirs up trouble in the press for George and his humble family, and Alex realizes he has to get real about having a boyfriend from the wrong side of town.

While George acknowledges his modest upbringing, he doesn’t let anyone insult his family. Life’s no fairy tale, and regardless of his royal title, Alex might destroy his one chance for happily ever after.

Review: This was my first foray into the world of Anna Martin, and I was pleasantly surprised by her writing style, characterization, and world building. I was not sure what to expect with My Prince, but it was much more entertaining than I thought it would be. She took two guys who were not only from different sides of the track but were so far away from those tracks they couldn’t even see them, and made them work.

George is from a poor family who lives on benefits, and Alex is Dutch royalty. These two should have never met, let alone fallen in love, but fall in love they did, and it was an amazing story to watch unfold. Alex isn’t your typical snooty, look your nose down on the peasants kind of royal. Instead, he was a good guy who just wanted to be accepted as Alex, not as Prince Alex. Of course, he was born and raised with a platinum spoon in his mouth, and Gucci shoes on feet, never wanting for anything, so yeah, he still was far from common. George just wanted to carry his own weight, love without being in the spotlight, and help his mum take care of his six younger siblings still at home. George is an all around good guy and it’s no wonder Alex fell for him.

I expected Alex’s royal family to lay down the law and force him to not only give up being gay, but give up his commoner boyfriend, as well. Neither happened, and it made this a much better read than I planned on. Sort of a Prince and the Pauper romance, but modern day and much sexier. These two were off the charts hot and the sex scenes were quite steamy. So if you haven’t had a chance to venture into this modern day fairy tale then I highly recommend that you give it go.