Posted on November 25, 2015 by thebloggergirls

Reviewed by Morgan and Susan65 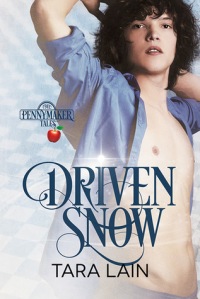 Blurb: Young Snowden “Snow” Reynaldi is brilliant, beautiful, and alone. Though he’s shy, weird, and tolerated by the NorCal University students because he’s a renowned whiz at chess and helps put the school on the map, that doesn’t keep him from dreaming of the object of his desires: Riley Prince, championship quarterback.

When Riley needs a physics tutor, Snow jumps at the chance, and their relationship heats up—but Riley has to come out of the jock closet to get anywhere. Meanwhile, Snow’s one true friend and mentor, Professor Kingsley, marries a woman who secretly wants the chess tournament glory and money for herself. Soon after, the professor collapses and Snow finds himself underwater—literally. In a car!

Seven frat brothers from Grimm College rescue Snow just in time for his life to get even worse, and Snow discovers the one relationship he always wanted slipping away. With evil looming at every turn, Snow must survive if only to prove he’s the fairest of them all and regain the trust of his handsome prince.

Morgan’s Review: Snow is a chess Grand Master. He’s lived most of his life alone and making conversations in his head. He’s also a physics genius. He’s the shy, geek, the wallflower.

Riley is a star football player. He’s the golden boy, the jock, the “big man on campus”. He needs to pass Physics in order to stay eligible. He’s also a closeted gay man.

Both Riley and Snow have been crushing on the other… so when the football coach asks for help for his star player, Snow volunteers – despite the fact that he’s got no time for stuff like this.

In the meantime, Snow’s chess coach and best friend and pseudo father-figure, is acting totally out of character by hanging out with the beautiful Anitra, another Chess Wizard. She’s got her claws into him and suddenly he’s married to her! When people start getting hurt, including her now-husband – Snow begins to investigate just what she’s up to.

When push comes to shove, will Riley trust Snow or the smear campaign that paints him as a prostitute? Will he believe Snow when he says Anitra is evil? Or will he go back to his easy life in the closet?

Riley – Riley Prince is his full name – is Snow’s Prince, too. He’s practically perfect in every way.

There is a bit of tongue in cheek in this story and a lot of laughter. Snow is hysterical! His inner monologues are too funny and his nerdisms are perfect!

Riley is simply charming and with one notable exception, pure perfection for shy Snow.

The smexy times are pretty dang hot and the feels are wonderful.

If you put aside your “this is real?” doubts, and just take it for what it is – a fun, fantastical tale with a nod toward the old story – you will fully enjoy it! It’s a New Adult title, so steamy, but not over the top.

Tara Lain is a fantastic writer and this was a fun new look at the old fairy tale.

I loved it and highly recommend it.

Susan65’s Review: I picked up this book because I am a huge fan of this author; and that’s it. The cover didn’t grab me, the blurb didn’t grab me, and I was hard pressed to see how a nerdy chess master and a college football quarterback could breathe new life into the tried and true college athlete vs nerd theme. But I was wrong. There was so much to this story, so much depth and plot and characterization that I was actually hard pressed to even put it down. And I didn’t put it down until I finished it.

The cover and the description of Snow didn’t quite work for me. He’s a cutie, for sure, but the book constantly describes him as being more beautiful than any woman… I disagreed with that assessment and forced myself to picture him differently in my head. That, my friends, was the only bad part of this story for me. Not much of an issue than, huh?

Riley and Snow’s romance is actually incidental to the whole storyline…and what a crazy story it is. We have a psycho trying to discredit and possibly kill Snow, homophobia running rampant on the college campus and especially the football team, Snow being accused of any and everything to ruin his chance at a championship and love. In a way it was over the top, but at the same time, it kept me on my toes wondering what would happen next. I was entertained….highly.

The many secondary characters were just as well rounded and integral as the main guys. The wacky older woman who lived in Riley’s apartment building, the fraternity from the other college that rescues Snow, Snow’s mentor, and especially his mentors lovely lady, Anitra. My head was spinning, but I never lost interest and couldn’t wait to see how the author settled all the drama. Needless to say, it has a happy ending and I highly recommend any book by this author, including this one.

*We received a copy of this book from the publisher in return for a fair and honest review.*