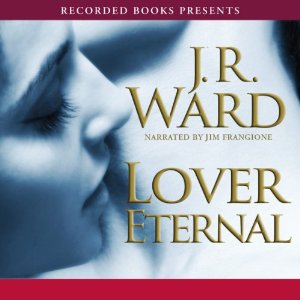 Blurb: In the shadows of the night in Caldwell, New York, there’s a deadly turf war raging between vampires and their slayers. There exists a secret band of brothers like no other-six vampire warriors, defenders of their race. Possessed by a deadly beast, Rhage is the most dangerous of the Black Dagger Brotherhood.

Within the brotherhood, Rhage is the vampire with the strongest appetites. He’s the best fighter, the quickest to act on his impulses, and the most voracious lover-for inside him burns a ferocious curse cast by the Scribe Virgin. Owned by this dark side, Rhage fears the time when his inner dragon is unleashed, making him a danger to everyone around him.

Mary Luce, a survivor of many hardships is unwittingly thrown into the vampire world and reliant on Rhage’s protection. With a life-threatening curse of her own, Mary is not looking for love. She lost her faith in miracles years ago. But when Rhage’s intense animal attraction turns into something more emotional, he knows that he must make Mary his alone. And while their enemies close in, Mary fights desperately to gain life eternal with the one she loves…

Review – Book: Rereads and audio’s gives the reader a second and third chance to not only reconnect with the Brothers but to discover things that were forgotten. For instance, I’d completely forgotten that Bella and Mary were neighbors, that Mary was so tough and independent, and that the beast actually moved on Rhage’s back. I knew all of this, but after 13-14 books into the series, so much is forgotten so these rereads and listening to the audio books brings back all the feels that I’d loved so much about this series from my first read.

Rhage is the strongest, largest, and most beautiful of the Brothers. He is also the one cursed with a beast that lives within him and gives him pure fear that he will one day lose control and the beast will hurt or kill his brothers. Mary is a sweet, unassuming, very normal women who just so happens to be suffering from leukemia. She is assumed to be Rhage’s sister when they are out because he is that much more “Hollywood” to her “girl next door” plainness.

Watching her suffer silently while shutting out Rhage was difficult. I understood Mary; she is a realist and so am I, but she is also stubborn and that came across more as being harsh and uncaring to Rhage. Where Mary was suffering physically, Rhage suffered mentally. He hated the way he had to appease his beast with fighting and women, he hated that he was considered a legend with the women, and he hated that his brothers found that promiscuity to be something to applaud instead of despise. Mary saved Rhage, and Rhage saved Mary. It wasn’t easy and the ending leaves the reader on pins and needles, but the Scribe Virgin, for once, seemed to have a heart.

Review – Audio: I am very happy that Jim Frangione remains the narrator for the series. It is very difficult to change voices and remain vested in a series when the characters change. Having Jim maintain the same cadence and passion that he showed in Dark Lover made me feel connected and kept me in the now. Now, I get to move onto Lover Awakened, and I am looking forward to hearing how the narrator brings my favorite Brother to life.