Blurb: In the shadows of the night in Caldwell, New York, there’s a deadly turf war raging between vampires and their slayers. There exists a secret band of brothers like no other-six vampire warriors, defenders of their race. Possessed by a deadly beast, Rhage is the most dangerous of the Black Dagger Brotherhood.

Within the brotherhood, Rhage is the vampire with the strongest appetites. He’s the best fighter, the quickest to act on his impulses, and the most voracious lover-for inside him burns a ferocious curse cast by the Scribe Virgin. Owned by this dark side, Rhage fears the time when his inner dragon is unleashed, making him a danger to everyone around him.

Mary Luce, a survivor of many hardships is unwittingly thrown into the vampire world and reliant on Rhage’s protection. With a life-threatening curse of her own, Mary is not looking for love. She lost her faith in miracles years ago. But when Rhage’s intense animal attraction turns into something more emotional, he knows that he must make Mary his alone. And while their enemies close in, Mary fights desperately to gain life eternal with the one she loves…
END_OF_DOCUMENT_TOKEN_TO_BE_REPLACED

Posted on January 10, 2015 by thebloggergirls 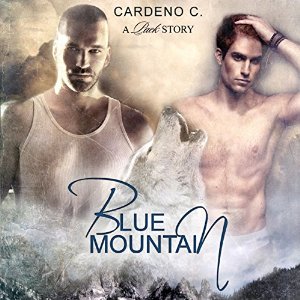 Blurb: Exiled by his pack as a teen, Omega wolf Simon Moorehead learns to bury his gentle nature in the interest of survival. When a hulking, rough-faced Alpha catches Simon on pack territory, he tries to escape what he’s sure will be imminent death. But instead of killing him, the Alpha takes Simon home.

A man of action, Mitch Grant uproots his life to support his brother in leading the Blue Mountain pack. Mitch lives on the periphery, quietly protecting everyone, but always alone. A mate is a dream come true for Mitch, and he won’t let little things like Simon’s rejections, attacks, and insults get in their way. With patience, seduction, and genuine care, Mitch will ride out the storm while Simon slays his own ghosts and Mitch’s loneliness.
END_OF_DOCUMENT_TOKEN_TO_BE_REPLACED 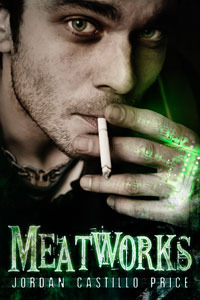 Blurb:  Desmond Poole is damaged in more ways than one. If he was an underachiever before, he’s entirely useless now that he’s lost his right hand. He spends his time drowning his sorrows in vodka while he deliberately blows off the training that would help him master his new prosthetic. Social Services seems determined to try and stop him from wallowing in his own filth, so he’s forced to attend an amputee support group. He expects nothing more than stale cookies, tepid decaf and a bunch of self-pitying sob stories, so he’s blindsided when a fellow amputee catches his eye.

Corey Steiner is a hot young rudeboy who works his robotic limb like an extension of his own body, and he’s smitten by Desmond’s crusty punk rock charm from the get-go. Unfortunately, Desmond hasn’t quite severed ties with his ex-boyfriend, and Corey isn’t known for his maturity or patience.

Meatworks is set in a bleak near-future where cell phone and personal computer technologies never developed. In their place, robotics flourished. Now robots run everything from cars to coffee pots. Taking the guesswork out of menial tasks was intended to create leisure time, but instead robots have made society dependent and passive.

Desmond loathes robots and goes out of his way to avoid them. But can he survive without the robotic arm strapped to the end of his stump?
END_OF_DOCUMENT_TOKEN_TO_BE_REPLACED