Posted on February 27, 2016 by thebloggergirls 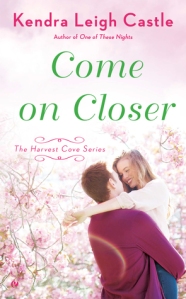 Blurb:  Nothing’s sweeter than a chance at true love…

Larkin O’Neill refuses to let anything stand in her way. Despite a troubled upbringing, she’s created the life she always wanted, surrounding herself with close friends and opening the bakery of her dreams. But the free-spirited baker is blindsided when she falls hard for the local bad boy. She knows that she should stay away, but the sizzling attraction between them is just too tempting…

Shane’s love ’em and leave ’em ways have left him a persona non grata in Harvest Cove. But when Larkin bursts into his life, the handsome lawyer can’t think of anywhere he’d rather be than by her side. She’s the first person in a long time who believes there could be more to him than meets the eye. Now he’s determined to prove to Larkin that he’s worth taking a chance on—and prove to himself that he’s the kind of man she deserves.

Review: I read this back in December 2015 because I couldn’t contain my excitement of getting back to the residents of Harvest Cove. So when I received the ARC, I was deliriously happy (I might have whimpered a little bit) and went on reading it. Let me tell you my first reaction when I finished this book – I hugged my Kindle, huge smile on my face, and I said, “Gosh, I loved this”. Yes, Leigh Castle’s latest installment in her charming Harvest Cove series, Come On Closer, was perfect for me in every way.

I was first introduced to the idea of Shane and Larkin back in book #2, Every Little Kiss. I remembered that time Shane, the all-time serial heartbreaker, who never have a meaningful relationship (which makes him pretty much a persona non grata for the women at Harvest Cove) asked Emma (the heroine) of to find him someone to be his plus one to Jake and Sam’s (Emma’s sister) wedding. Emma asked her free-spirited baker friend, Larkin. Larkin and Shane danced at the wedding – she clearly wasn’t afraid of his reputation – and that small moment was etched in my mind – I wanted so badly to read more about them; I was very happy when last year, Leigh Castle confirmed that Larkin and Shane would have their own book.

And oh how I loved and adored these two so very much ❤ ❤ ❤. First, Shane Sullivan. OH MY GOD. Yes, Shane was considered a lousy prospect for a long-term relationship. Most Harvest Cove residents willingly told Larkin that it was a bad idea. But I loved that Shane had layers and there was more than meet the eye for this red haired man.

Let’s see … Shane’s best friend (aside from Jake) was Ryan, the gay teacher, so clearly he wasn’t homophobic. Shane was willing to be dragged into delivering cake to a baby shower. He didn’t mind Larkin’s obsession to fluffy pink unicorns. He had a sugar tooth (which made him the subject of Larkin’s cupcake tests). Shane was charming, yes, but he also showed why people like Jake and Ryan kept him as their friend. Like the part where he was taking care of Larkin when she was sick. I fell for Shane, HARD. He was a great hero, not because he was perfect, but because he respected the heroine, he was willing to be silly, and he progressed throughout.

Then Larkin – oh, my dearest sweet, brave, wonderful, Larkin – who left her Podunk small town to make something out of herself. Who danced when she was baking, who sang to Marley, who loved her unicorns, who admitted that she was girly and owned it – and who saw Shane for more than who he was presenting to the world. Larkin was so perfect for Shane because she made Shane wanted to be better, and she did. Even when there were moments when she was too stubborn for her own sake.

I could write hundreds of words, describing how much I loved Larkin and Shane, but this review is already too long. Simply put, I loved every single minute of reading this. Even with the family issues – and how I loved that Shane and Larkin were able to rise above their not-so-good family – the book made me very happy and content. It was like a comfortable fuzzy sweater that enveloped me inside the cocoon of bliss. It was a perfect romance read. Shane and Larkin have catapulted themselves as one of my favorite romantic couple of 2015; while the book becomes my favorite of the series and one of my favorite reads last year as well.

Boy, am I glad that Leigh Castle decided to dip her toes in contemporary romance genre *laugh*