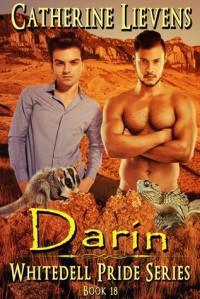 Blurb:  Sometimes you need to listen only to your heart rather than to what other people say.

Darin hasn’t actively been looking for his mate, even though he wants nothing more than to meet him. He’s lonely and he works too much, so he’s been hoping for a miracle—for his mate to walk into his bakery. It hasn’t worked yet, but then a man walks into the mansion’s kitchen and declares he’s Darin’s mate, and Darin gets the miracle he’s been waiting for.

Ira has known Darin was his mate for a few months, but he’s been burned by people who should’ve loved him before, so he took his time before deciding to talk to him. Now that he knows Darin won’t hurt him, he takes advantage of a trip to Whitedell to finally properly meet his mate.

Darin and Ira don’t wait to mate, even though they know their families might not be happy about it. But what their families think isn’t their only problem, and when the hunters attack again, Ira will need to fight for his mate and his friends.

Review: Darin is the twin sugar glider and a baker and has stated that the only way he’ll find his mate is if he wanders into his shop, because he’s not going out looking. Well. In walks Ira, a venomous snake shifter, and he’s Darin’s mate.

Like all the books in this series, the mating is fairly instantaneous and though there is a little fear between the prey and predator in each of the men, the mating instincts easily override the fear.

There is a teeny bit of drama surrounding Darin’s family, but mostly this is a book with almost no angst. No hurdles to overcome. Just funny smexy times and antics with the other couples.

It was a sweet interlude that moves the series forward and not much substance.

I liked it though it was not my favorite. I loved when Ira got to use his venom on the bad guys! I hope we get to see more of the half-shifting in future books. We also get to see Adan’s mate, and I hope his story is soon.