Audio Review: Starting with the Unexpected by Andi Van 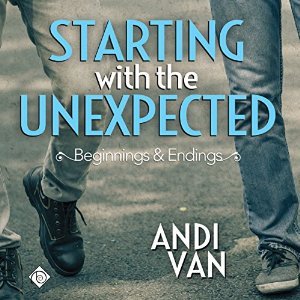 Blurb: Zachary Blaise is having a weird week—even by his standards. Though he’s gay, the radio personality has been dumped via text by a girl named Marian—and he’s never even met her. On top of that, he’s developed a massive crush on Marcus, the new waiter at his favorite diner. His best friend thinks the whole thing is hilarious.

Marcus’s week hasn’t been his best either. He’s been betrayed by those closest to him, and although he isn’t the guilty party, Marcus is the one getting harassed.

Impossibly, things are about to get even weirder. Marian has secrets, and those secrets are going to make some serious ripples in Zach’s life. When he discovers that the girl called Marian is actually the man named Marcus, Zach stumbles down a rabbit hole of abusive ex-boyfriends, psychotic relatives, and revelations from his own past. If he can survive the chaos, the journey might prove worth the effort.

Review – Book: Zachary Blaise is a twenty-something radio personality for a late-night LGBTQ talk show. He’s snarky and funny and self effacing and currently single! He mistakenly intercepts a text meant for someone’s boyfriend who cheated on them with the other person’s sister so Zach assumes it’s a girl and that is supported by the texter’s name – Marian.

Marian and Zach end up texting one another several times a day for a few weeks, becoming friends of a sort. When Zach meets Marcus, a cute new waiter at his local diner, he tells his “friend Marian” about the interaction, spurring Marcus to confess that he’s actually Marian. (I’ll let you listen to the story to see why the confusing name.)

After the big reveal, Marcus and Zach become close friends – neither wants to cross into “boyfriends” being as Marcus is on the rebound and still dealing with a crazy, stalker ex.

When things begin to get really scary with the ex, Zach and Marcus can’t deny their attraction anymore and they begin a relationship. There is a bit more drama and some stuff of Zach’s to deal with before they find their HEA.

I was surprised I didn’t remember seeing this come around as a book – it’s SO GOOD! I was psyched to be introduced to it as an audiobook and glad to have been given the chance to experience it!

This is a slow burn romance but with a very satisfying ending that I think anyone who enjoys witty dialog and lots of feels will really enjoy. I thought the stalker ex was a bit OTT, especially the “twist” there at the end, but it served it’s purpose of getting our MCs together nicely.

Review – Audio: Jonathan David is a new narrator for me. He does a nice job with the “acting” and modifies his voice for effect, though he didn’t give the individual characters unique voices. He was easy to listen to and overall a good way to enjoy this story.