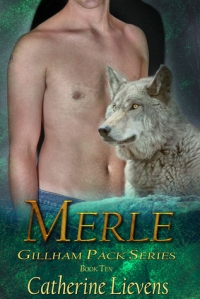 Merle isn’t the wolf he was before, and who could blame him? He was sold to the labs, then Tom, Alpha Erskine’s second, kidnapped and tortured him, leaving him for dead. Merle’s body has been healed, but his mind hasn’t, and he’s struggling with everyday life and nightmares. Add to that an overbearing mother, and his life is a mess.

Nootaw left his wendigo tribe a year before, but even though he hasn’t hurt anyone since then, people still regard him with fear and disgust. Not even moving to Gillham changed that, but he’s use to it by now. When Nootaw is asked to help find Merle, he doesn’t expect Merle to take a sniff at him and tell him they’re mates. Nootaw isn’t sure what to do with Merle, because everyone knows wendigoes don’t have mates.

Merle insists on giving Nootaw a chance, even though he might lose his mother over it. Then Nootaw disappears, reappearing with someone Merle hadn’t expected. Will Merle be able to leave his nightmares behind and be the man Nootaw needs him to be? And will Nootaw manage to get used to a life he’d never thought he could have?

Review: Summarizing this story is simple, but analyzing my feelings for it… not so much. I think this is NOT a standalone book – many in the series are fine by themselves, but this has WAY too many issues that are confusing unless you’ve been reading along both the Gillham and Whitedell series.

Basically, Merle is a twenty year old wolf shifter who had been previously abducted by the Glass Chemical company and experimented before he escaped only to be tortured by Tom, one of his ex-pack mates! The last left him suffering from PTSD and he is still wrecked by nightmares and living at home trying to re-enter his normal life again.

Nootaw is a Wendigo, the brother of Chogan who mated Jared and lives in Whitedell. Nootaw – unlike Chogan – did participate in the hunting and eating of humans and feels tremendous guilt about this, but has since “converted” away from that entirely and is currently training for being an Enforcer with the Gillham Pack.

When Merle and Nootaw realize they’re mates, they face a whole bucket of problems. 1) Is Merle ready to mate at all?; 2) Wendigoes don’t have mates, so will Nootaw even recognize the connection; 3) Will Merle and the pack and Merle’s mother welcome a mating to a Wendigo like Nootaw?

Though they eventually answer these questions, another wrinkle appears in the form of Nootaw’s baby… so… at the very least these guys are going to have a tough go of it.

I think this book took on too many tough subjects and tried to mash it into one story. There were just too many complications and it was far too short of a book to really address even one of them satisfactorily.

I admire the attempt to “normalize” Nootaw’s past and to find a way to make it less “eww” that he used to hunt and eat people. I’m not sure that I completely got over the “eww” factor myself, but I did at least see how it would be possible given the explanation.

Merle, however, has so many things to overcome. In no way did he address adequately his PTSD. I think the family objections got glossed over and “fixed” fairly haphazardly with a paragraph late in the book wherein his mother recants and apologizes and agrees to try. The fact that neither “mate” really had any healthy relationship history with which to model their current relationship wasn’t really addressed, and I felt the sex part was a bit too easy for them. Finally, the nastiness with Tom and the fighting and then dealing with the new baby happened so quickly that it too felt underdeveloped and poorly addressed.

So… while I admire ALL the potential topics this book raises, I’m not sure it really adequately addressed ANY of them and they all came off as sort of fly-by-night.

While I will continue to read the series (it’s like crack to me – I just can’t stop!) this one was not my favorite.