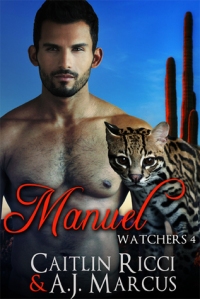 Their attraction is instant, but before they can make sense of the pull between them, Sydney’s home is attacked by a rival drug lord. Sydney is taken and Manuel will need the help of the other Watchers to mount a rescue operation.

Review: This is a quick little story about Manuel – the Southwest Watcher – an ocelot. He likes the isolation/desolation of the desert and doesn’t really see having a mate as a good thing. He’s been a bit bored lately, so he goes to town looking for action. He finds a coyote-shifter ironically using other shifters as “mules” (there are no mule-shifters that he knows of) for moving drugs across the border. Being as this risks the exposure of shifters to humanity, Manuel goes after the coyote and his cohorts with death on his mind.

While tracking the leader, Manuel learns that the drug lord’s son, Sydney, is someone who will likely end up hurt in all the drama if Manuel doesn’t intervene. When Manuel meets Sydney he realizes Sydney is his mate.

Most of the story is about the drug running and the rescue and only a bit about Sydney and Manuel falling in love. Though it’s well written, it wasn’t as romantic as some of the earlier books, so…not my favorite.