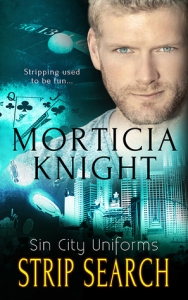 Review: Reed is a bi-sexual, but he’s spent most of his dating and married life with women. He’s not had but one relationship with a man and it wasn’t very good. He’s not in the closet so much as not advertising his position. When he meets Dakota, he’s immediately attracted to the charismatic dancer and isn’t afraid to act on that.

Dakota is struggling against the slime his ex-boss sends his way when Dakota won’t get involved with him. Now his brother is missing and he’s lost his new job, too. Reed seems too good to be true, even if he doesn’t have all the answers, he’s there to help.

There were some really cute/sweet parts to this story. I loved seeing Reed explore the “gay” side of his bisexuality with the open and somewhat “toppy” Dakota. It was a nice role reversal.

Most of the drama in this book centered around the bad guys and finding Dakota’s brother.

If you’re a fan of the series, you’ll want to pick this one up, though you don’t have to have read the previous books to read this one.

Fans of gay virgins, toppy twinks, strippers, cops and Las Vegas will find plenty to like in this story.

Overall Impression:  It was good