Posted on October 14, 2016 by thebloggergirls 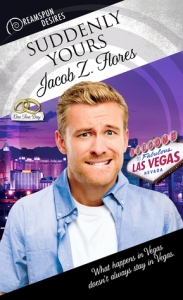 Blurb:  What happens in Vegas doesn’t always stay in Vegas.

Cody Hayes is having one epic morning-after. The hangover following a Vegas bachelor party is nothing new to him, and neither is the naked man in his bed.

His apparent marriage is a different story.

Carefully plotting every detail of his life carried Julian Canales to a Senate seat as an openly gay man. A drunken night of Truth or Dare isn’t like him… and neither is marrying a man he just met. He’d get an annulment, but the media has gotten wind of his hasty nuptials. If Julian’s political career is going to survive, he has to stay married to a man who’s his opposite in every way.

Now he must convince Cody that all they need to do is survive a conservative political rival, a heartbroken ex, their painful pasts… and an attraction neither man can fight.

Review: When I still read a lot of category M/F romance from Harlequin, accidental marriage (usually involves waking up in Vegas with hangover) is one of my favorite tropes. What draws me to this trope is how the couple might be forced by a situation to stay married, but over time, realize that they are actually falling in love with one another and it’s more than just a good sex experience, of course. It’s a ‘backward’ tale of falling in love and to me, that’s interesting.

Unfortunately, I didn’t exactly find that kind of conflict in this book. Don’t get me wrong, I still enjoyed it … but I just didn’t find the ‘progress’ from not feeling anything to falling in love with these guys. Why? Because I felt that it was clear from the beginning how Julian and Cody are a perfect fit for each other; they have a great amount of chemistry… I was having difficulty believing that they weren’t on their way to falling in love right from the start.

It was easier to see that Julian might not feel the same towards his ex … but to Cody? Hell, Julian is romantic to Cody, he is protective, he wants Cody to have everything, and he tries to make sure that Cody is happy. Julian keeps saying how Cody is different than any other man for him. To me, Julian is already there … in love with his husband.

I might understand that Jacob Flores tries to separate affection and love, and that one can be married with affection but without love … but here, I felt that Julian and Cody have both already! So the conflict wasn’t there to begin with.

Having said that … I was still fabulously entertained! Flores’ brand of humor fits me. I found myself smiling and all-in-all overjoyed. Both men are likable, although Cody is definitely the sunshine of this book. His carefree attitude, his witty one-liners, his determination to make Julian less of an ass-tight man … it is all a gorgeous package that made me fall in love with Cody. Julian might be a little clueless when it comes to his own feelings but I must admit that his love declaration is GRAND. Kudos Julian.