Posted on November 9, 2016 by thebloggergirls 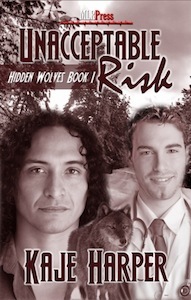 Blurb:  Simon Conley was born a werewolf, making him one of a tiny minority in a sea of vanilla humans. The safety of the pack lies in absolute secrecy, sometimes violently enforced. In a species where pack-members are born and not made, being gay is considered a perversion. So when Simon falls in love with a human man, he’s twice damned. Even his Alpha’s grudging tolerance may not be enough to shield him from the hatred of the other top wolves. Then his lover Paul stumbles across pack secrets Simon was sworn to keep, and if the pack finds out, they may both end up dead.

Review: First, you have to ignore the cover. I’m hoping, in time, Kaje Harper will get the rights back to this series and change the covers because they aren’t the best.

Second, this is a long book, but so well written you don’t mind (too much)!

This is a much different book than most (?) shifter books out there. First, the pack that Simon belongs to is NOT a good one. Sure, there are some good guys and the Alpha, Gordon, is questionably ok, but there are several in the pack who are bad and who bully Simon. Normally, in shifter books, that would be where Simon would run away and find that magical place where he can be accepted or where he would become a lone wolf. Nope. He just sort of lives under the radar, watching his back, and hoping he won’t get killed for being gay. This is probably my only real complaint about this book. Simon had no plans to make the pack better or any plans to leave the pack, so I could never reconcile just exactly how he and Paul were ever going to live happily ever after. (They do and you’ll find out how, but it wasn’t because of something Simon actively planned.)

The mate thing is subtle, too. It makes Paul act out of character and Simon has to acknowledge their bond because it’s so strong, but it’s not like books where one sniff and Simon is nearly incapacitated with lust or possession. In a way, I guess, it makes it more “real”? That’s the closest approximation I can come to explaining it. They have real life problems that don’t disappear with magic just because one of them can change into a wolf.

Simon does have accelerated hearing and extra-strong senses and that kind of thing and there is an “otherworldly” bond that occurs between mates, but all of it is more subtle than you find in most shifter books.

To that end, this subtlety makes this book both more and less fun. On the one hand, it’s more fun because it’s unique and it feels more plausible and less magicky. On the other – the magicky stuff is fun, so this is a little … more pedestrian than other shifter stories.

The GFY aspect of this book is handled amazingly well. Paul is both believable in his experimentation and the two of them are so sexy with as they begin to explore one another. It’s so sweet how poor, lonely, Paul finds this man who wants him so badly and Paul is able to look past Simon’s sex to see the person who makes him feel good. It’s pretty awesome.

Paul is a veterinarian and does several “vet” things and they are all very accurate. When he has a day from hell that sees him euthanizing two animals due to horrible circumstances, I really felt his pain.

The book ends with our couple in a decided HFN (that we know is forever) but I’m hoping the series will continue to give us glimpses of the couple as their bond deepens, because, really, by the end they are still on fairly shaky ground.

As a lover of shifter romances, this book languished in my TBR pile, not because of the subject or the author (both of which I love) but because every time I started it, I set it aside due to the fundamental different way it treats shifter lore. If I found myself in a mood for a shifter book, this was never quite what I was craving. However, it’s an excellent book and the shifting aspect is really more about the pack/family dynamics than anything else. So, lovers of shifter books should find this satisfying but so should people who aren’t really that fond of shifter books.

All in all, I look forward to moving on to the rest of the series and recommend this book highly. I give this book 4 of 5 stars because the length is daunting. There is a lot of pack stuff in here that might or might not be needed (we’ll see how the series plays out) and that sometimes bogged down the relationship stuff (and I read these stories for the relationship stuff). 😉

*I purchased my own copy of this book for my review.*