Posted on February 13, 2017 by thebloggergirls 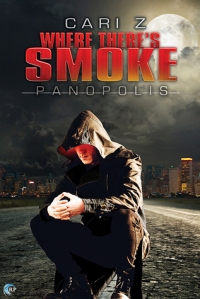 Blurb: Panopolis is a rough place to be an average Joe. I came here looking for adventure and excitement, but nobody cares about one more normal guy in a city filled with super-powered heroes. The closest I’ve come to glory is working in a bank that villains often rob.

But then I maybe accidentally-on-purpose helped a villain escape the hero who was trying to save the day. Imagine my shock when, a week later, that villain asked me out for coffee. One date turned into more, and now I’m head over heels in love with Raul.

Falling in love with the guy dubbed the Mad Bombardier isn’t without its downsides, though. I’ve had to deal with near-death encounters with other villains, awkwardly flirtatious heroes who won’t take no for an answer, and a lover I’m not sure I can trust. It’s getting to the point where I know I’ll have to make a choice: side with the heroes, or stand fast by my villain.

Either way, I think my days as a normal guy are over.

Review: What an imagination! I have to say, that for a person who doesn’t care too much about graphic novels/comic books – I was suitably impressed with the world building we get here in Cari Z’s series – Panopolis. I imagine that fans of that genre will probably get even more of a kick out of this series.

This is short – only 2 hours listening time – and I gather from looking down the line that our MCs really just begin their journey with this story.

What I liked: the quirky way living in a “super hero” land is portrayed and the fact that the “villain” is the “hero”. I liked that Joe is really, average. I don’t know much about him yet, but I think I like the Mad Bombardier (although I’m not crazy about the moniker). I loved Nick J. Russo’s narration – he does a great job giving everyone suitably “comic book” voices where appropriate and yet doesn’t go OTT.

What I didn’t like: the romance. It went from meeting to a coffee date to months later (I had to go back and re-listen to see if my audio was messed up!). I really wanted to see the romance and watch the first kiss and feel them fall for one another. I didn’t love the voice Nick chose for Raul – it was too smarmy and didn’t feel “boyfriend-like”.

All in all, I probably won’t be continuing with this series. I thought it was creative and fun, but the romance is what does it for me and that seems to take a back seat in this story.

4 of 5 stars for the narration