Posted on June 7, 2017 by thebloggergirls

Blurb:  Kiwi Nathaniel Dunn is in a fighting mood, but how does a man fight Wellington’s famous fog? In the last year, Nate’s lost his longtime lover to boredom and his ten-year job to the economy. Now he’s found a golden opportunity for employment where he can even use his artistic talent, but to get the job, he has to get to Christchurch today. Heavy fog means no flight, and the ticket agent is ignoring him to fawn over a beautiful but annoying, overly polite American man.

Rusty Beaumont can deal with a canceled flight, but the pushy Kiwi at the ticket counter is making it difficult for him to stay cool. The guy rubs him all the wrong ways despite his sexy working-man look, which Rusty notices even though he’s not looking for a man to replace the fiancé who died two years ago. Yet when they’re forced to share a table at the crowded airport café, Nate reveals the kind heart behind his grumpy façade. An earthquake, sex in the bush, and visits from Nate’s belligerent ex turn a day of sightseeing into a slippery slope that just might land them in love.

Review:   I like DSP’s “World of Love” line because it gives me a chance to ‘travel around the world’ without having to leave the comfort of my home. So when I saw that Sunset at Pencarrow was set in New Zealand, I jumped for a chance to be able to get the ARC copy. I’ve always wanted to visit New Zealand – geographically it was closer to Indonesia compared to Europe or United States – so why not go there through book first, right? Plus, sunset at Pencarrow looks amazing! 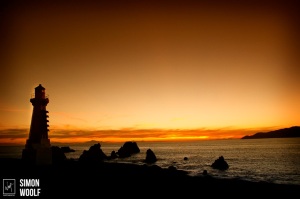 Now, while I did get to learn some Kiwi terms and probably a few places that I could add to my “visit-list” when I am able to go to New Zealand in the future, I hit a snag in the romance itself. No, it’s not about the short time that Nate and Rusty spend together – Rusty is an American in New Zealand for business, so he and Nate only have a few days before his flight back to America – but more that I didn’t feel the chemistry between these two men.

At one point, one of main characters said they were “taking one step forward and two steps back” … and I couldn’t agree more. You know that feeling, like when you and the other person seem to be in disconnect, like there is a static between that interrupts your communication? THAT is how I felt about Nate and Rusty. I don’t know if it is because these two characters are written by two different authors, or if it is because Nate and Rusty don’t really match, or it is simply because of lack of communication.

I did think that Nate contributed a lot to this matter. Nate seemed to be very moody; he sometimes was bothered by something that might be related to his past relationship and then his mind went to that bad place, leaving Rusty in a state of confusion. So I wonder whether what they had in that short time span is enough for a future chance of relationship. *shrugs*