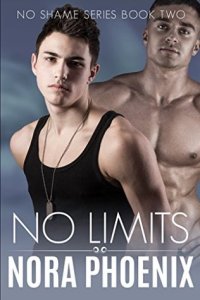 Blurb:  Josh is convinced he’ll never find someone who’ll love him the way he is. He’s not exactly a catch with his PTSD, which has transformed him into a homebody most of the times. Sweet, maybe, but also boring as hell. Plus, there’s that submissive tendency he recently discovered and is dying to explore. His complicated relationship with Noah and Indy don’t make it easy, either. When Connor shows interest in him, he can’t believe the sexy cop would look at him twice, let alone make an effort to get to know him. When he does, Josh discovers they have more in common than he’d ever thought possible.

Connor had survived the ordeal that left his best friend and fellow Marine dead, but that survival came at a price. He’s a robot, going through the motions, but barely alive. Until fate intervenes when he meets Josh. The vulnerable man triggers all kinds of protective and dominant urges in Connor, but what would a cute guy like Josh want with an inexperienced, closed-off, bossy steamroller like him?

When Connor discovers his past endangers Indy, all hope for a future between him and Josh seems lost. After all, there’s no way Josh will ever choose Connor over Indy’s safety and Noah’s lifelong friendship. When a crisis hits, can Connor prove he’s strong enough to deal with everything that’s thrown his way?

Review: This is a continuation of sorts to the previous book, No Filter, which I reviewed here. That book established on the relationship unit with Noah and Indy becoming the main couple. That left Josh, who, still part of that unit, needed to find his own match. He found that in Connor, the cop we also met in that story.

Josh has a few issues, namely his PTSD, which causes him to need an understanding partner. He also likes things a little on the rough side, sexually, despite his past, which also adds another layer to his issues. Connor has had a difficult time with being gay, though not for the usual reasons. He is mostly closeted where his job is concerned, and since most of his sexual interactions have not gone well due to his size, he never saw any reason to change that status. But, he is definitely interested in Josh, if they could just each get past their own insecurities. After a few stumbles, they reach a point where they are able to do just that.

There is also the factor of the other men in Josh’s life, namely his relationship with Noah and Indy. It is confusing for Connor at first, and it takes him a little bit to fully understand how they all fit together. Suffice to say, they are all ready and able to make some changes that enable Josh to focus more on Connor, and Connor is very understanding and even gets pulled into the unit a little more as their relationship progresses. The end result is perfect and exactly what each of them needs.

In between all of this, Noah has some issues with his disability, Josh’s past almost catches up with him, Indy’s past is still nipping at his heels, and Josh’s brother, Aaron, turns up, all of which end up making them a stronger unit. Things seem to be moving in the right direction for everyone at this point, but there is no doubt still some trouble coming down the road. The next installment looks to continue the story with a focus more on Aaron’s story, and it should be interesting to see how things work out for him with the martial arts professor, Blake.