Posted on November 22, 2017 by thebloggergirls 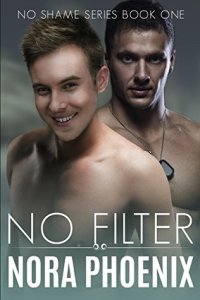 Blurb: Indy will do anything to prevent his mobster ex from finding him. Their last encounter left Indy recovering for months in the hospital, and ever since he’s become an expert at hiding in plain sight. Determined to stay under the radar, he takes on a new identity and moves from place to place. His life has no room for friendships, let alone love, so he keeps his heart firmly closed. After all, he has nothing to offer but a damaged body and a broken soul. Plus, he’s so done with men. Until he meets the man who breaks through all his defenses.

Former Army Medic Noah came back damaged from his last tour—in more than one way. Between supporting his best friend-with-benefits Josh who’s struggling with PTSD, dealing with his own issues, and the stress of his job as a physician assistant, rebuilding his life seems impossible. There’s little time for what Noah needs, let alone for what he wants. When he meets Indy, Noah discovers what he wants more than anything: for Indy to stay. But how will a relationship with Indy work when Noah needs Josh as well?

Indy never expected the strong, confident Noah to be as damaged and broken as himself. But what will happen if he starts letting Noah in? Indy knows he should run to protect Noah and Josh.

Noah needs Indy to stay more than anything. But will what little he has to offer be enough to make Indy trust him and stay?

No Filter is a steamy M/M romance featuring an open relationship (no cheating!) that ends with a HFN, but with the promise of a HEA. It’s the first book in the No Shame Series, and is not a stand-alone novel. It contains hot sex, a hint of a ménage, lots of talk about hot sex, flashbacks of said hot sex, and…Oh well, you get the idea. Also: trigger warning for mentions of sexual abuse.

Review: This is a really sweet story, aside from all of the horrible things that have happened to each of the men. They have what seems like a complicated relationship, but it is exactly what they each need, when they need it, and it all becomes very clear as the story moves on.

Indy is on the run after having been sold by his mother to a mafia/gang leader as payment for her screw up. He spent four years being horribly mistreated by him before he got away. But, he is surviving quite well, disguised as a woman and keeping a low profile. Though he now has a brown belt in martial arts, he is still very wary of trusting people. But, he doesn’t hesitate to help out Josh, a young man at the convenience story who was having a PTSD attack when it was being robbed. Wanting to return the favor, he sends Indy to the hospital where his bff works as an ER physician’s assistant.

Josh and Noah have been best friends since high school where Noah had Josh’s back against bullies. Over the years, through their time in the military, etc., they have remained close and leaned on each other for everything. This included helping each other through various recoveries. Josh’s being gay never bothered Noah, and they ended up sharing mutual benefits. Their relationship is solid, and while they tell people they are boyfriends, it isn’t quite on that level. So, when Indy comes into the picture, it is easy to understand Noah wanting them both, though for different reasons. He will never not be there for whatever Josh needs, and Josh knows about and is able to handle Noah’s issues. Indy isn’t quite able to handle everything with Noah, and they all just seem to fit together like puzzle pieces.

Josh and Noah make it difficult for Indy to keep his distance in many ways, the biggest being their care and trustworthiness. They never push Indy but are quick to trust him with their secrets. Eventually, Indy shares his. This ends on a definite HFN with Noah and Indy becoming the closer pair and actually becoming boyfriends. Josh isn’t out in the cold though, but with the interest of the cop, O’Conner, it looks like he might get his own relationship if it turns out O’Conner can be what Josh needs.

This was an interesting start to the series, and I’m sure there are some bumps in the road ahead. There is still the issue of Indy’s past catching up to them, and we still have yet to find out about the real cause of Josh’s issues. I’m definitely looking forward to continuing with this and seeing Josh find his own someone.

One thought on “Book Review: No Filter by Nora Phoenix”