Posted on March 7, 2018 by thebloggergirls 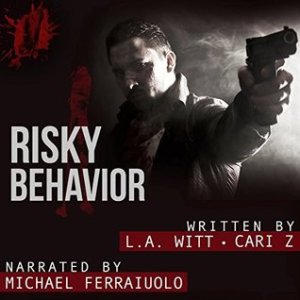 Blurb: It’s day one of Darren Corliss’s career as a detective, and not only has he been assigned a notoriously difficult partner, but the guy might also be a pill-popping dirty cop. Internal Affairs needs proof, and Darren gets to be their eyes and ears whether he wants to or not.

Detective Andreas Ruffner doesn’t play by the rules, and he doesn’t play well with others. With bodies piling up and a list of suspects who are way above his pay grade, the last thing he needs is a wet-behind-the-ears kid for a partner. Or babysitter. Not even if that partner is easy on the eyes.

As Darren gains Andreas’s hard-won trust, they both realize there’s more than just mutual suspicion simmering beneath the surface. But their investigation is heating up as quickly as their relationship, and Darren has no choice but to go along with Andreas’s unorthodox–and borderline unethical–methods. As IA puts the squeeze on Darren to give up the man he’s falling for, he has to wonder–is Andreas the only cop left in this town who isn’t dirty?

Wow! This was absolutely amazing! I (somehow) missed this series in books and am only now experiencing it via audiobooks, which is rare for me. I am so glad!!!

First, I’m stoked that the entire series is already written because I get to jump right into the next book. Second, listening to this was an absolutely enthralling experience and I’m glad it’s my first exposure to this story.

I’m sure there are reviews out there that might give away some of the “secrets” in this series – but I’m going to try to avoid that. Hidden in this story are quite a few surprises and I was honestly kept on the edge of my seat because I wasn’t sure which way the authors were going to go. I’m not as familiar with Cari Z., but I’m familiar with L.A. Witt enough to know she’d absolutely be willing to let her characters go through these rough times and deal with the aftermath later.

I love that Darren is such a great “opposite” to Andreas’ cranky and gruff exterior. He’s the perfect foil and the resulting chemistry is HOT. Andreas is quite a bit older than Darren and while it is a plot point occasionally, it’s not the focus. Mostly, the events in their back-stories that make them who they are shape these guys as characters. It’s very well-done and really makes them seem like real people.

Beyond the chemistry our MCs share, the action/adventure/mystery part of this story is REALLY gripping – and that says a lot coming from me because I’m not a big fan of mystery.

Listening to this is absolutely the best way to experience this as Michael Ferraiuolo nails the accents and gives us an entire cast of characters with just his voice. He’s amazing! He also has a great understanding of timing and emotions and really adds to the overall experience of this story.

I cannot wait for the next installment in audio format (I’ve had to read the books now because I just HAD to see where these guys ended up!)!

If I have any complaints it’s this – at least in this installment – it’s that our guys don’t get much of a break to enjoy being a couple and after all they went through I really wanted some kind of “calm” for them – even if temporarily.