Audio Review: If the Seas Catch Fire by L.A. Witt 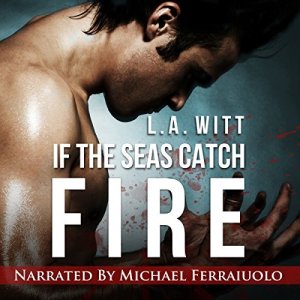 Blurb: Sergei Andronikov was a child when the Mafia wiped out his family, leaving him with nothing but a hunger for revenge. Years later, through ruthless strategy and tireless patience, he’s a contract killer working for the three families ruling Cape Swan… and he’s nearly in position to bring them all down from the inside.

Domenico “Dom” Maisano is Mafia royalty, a made man… and a hitman. He’s caught up in a violent life he can’t escape, struggling to maintain an image he doesn’t want, and suppressing desires he can’t have.

A chance encounter throws the killers into each other’s paths. Though Dom knows he’s playing a dangerous game, he’s intrigued and keeps coming back. Sergei can’t resist him either—Dom is everything he set out to destroy, but he’s also everything he’s ever ached for in a man.

Then Sergei gets the contract he’s been waiting for—the hit that promises to bring the town’s Mafia to its knees.

But when a capo makes an unexpected move, Sergei must choose between dropping the hammer on the families he vowed to annihilate, and protecting the man he swore he wouldn’t love.

And the wrong choice—or even the right one—will destroy them both.

I knew this wasn’t going to be all cotton candy and sugary fluff, but, it sure had its surprising moments. However, those moments were sprinkled with such brutality that my first thought was, wow, this would make an incredible dramatic movie. I can clearly see this on the big screen. Action, heartache, violence, inhumanity, and love.  Any time a blurb starts with “two killers meeting”, you know you are in for a ride.

Sergei and Dom broke my heart, both of them equally. Dom was born into a mafia family and is the son of a traitor. His life was designed for him and he had only two options: do what he was told, or end up like his father. These weren’t veiled threats, he saw his own father die when he was only a small boy. He knew his life belonged to the Maisano family, and that life made him into a killer. Sergei watched his father and brothers die by the hands of the mafia, and saw his mother so mentally tormented by that viciousness that she no longer knew who Sergei was to her.  That moment defined Sergeis and he voluntarily chose to be a contract killer with the sole purpose of taking down the mafia. Two brutal killers who didn’t choose their paths in life, but had them chosen for them.

Until they meet, one not realizing exactly who the other is, and then ever so slowly they start falling for each other. What started out as a sexual arrangement became so much more…one that took a defining moment to realize exactly how much more.

This is a pretty long audio, and at times I wished it were a little shorter…until it ended and then I wanted more. I know, I know, let the story play out at its own pace. This is the third performance I’ve listened to by Michael Ferraiuolo and it will not be my last. He is fast becoming a favorite for me and I will be looking for him in future audios. In this case, I’d already listened to his russian accent in The Master Will Appear, and I instantly recognized MIsha’s voice and had to tell myself to think Sergei, think Sergei…and even though I still heard Misha in the back of my mind, I had no problem hearing Sergei, as well. And his Dom voice? Hubba, Hubba, I wanted to climb all over that man…that voice was velvet smooth and pure sex.  Michael has a way with narrating and I will never turn down a chance to review one of his audios…even if the story’s blurb doesn’t grab my attention, I know if he is the one performing it will make me think twice. He is that good.

I have read a ton by LA Witt and it is no secret that I love her work, so I also went back and looked up my own ratings for audios performed by Michael Ferraiuolo and they are all 4.5 to 5 stars. I think we have a winner here folks and I will tell you clearly and emphatically that you will enjoy his performances. No surprise that this one is highly recommended.