Risking It All by Morningstar Ashley: Exclusive Excerpt!

Posted on September 22, 2018 by thebloggergirls

Exclusive Excerpt from Risking It All

Danny had a little more than two hours before Jaden got there, and he had plans for them. Not the plans his dirty, sex-starved mind clearly had, but something Danny hoped Jaden would think was fun.

Each time they got together, they played SoR, and they had a blast and even managed conversation in between, learning new things about each other. Those new things had been good, showing them as much as they were different, they also had a lot of core things in common. Danny wanted that again.

With each new piece of information he learned about Jaden, Danny liked him more. And the more Danny learned, the more certain he felt of himself around Jaden. The shine of the rich, city guy was still there, but now Danny saw beneath the surface of that shine. Saw a guy who was just like Danny. The differences between them mattered less and less.

In a short amount of time, Jaden had become important to Danny. Another friend, someone he trusted, someone he wanted to be around. But the connection was more than what he felt for Mac or Allie. If he was honest, the more scared him but thrilled him all the same.

Danny wasn’t fooling himself. He knew whatever was going on with him and Jaden, in the end, wouldn’t be anything else than what they had now. Danny would have to be dumb to think it could be. But the connection, the want, was there, and he wanted to roll around in it, soak it all up for as long as he could. It made him happy. Happier than he’d been before.

And wasn’t that a kicker. Something new in his life made him realize how unhappy he was before. No, he was happy before Jaden, but not he realized he could be happier, could be more fulfilled. He could have something just for himself. Something he could hoard and keep, not share or giveaway like every other part of himself and his life.

And for that reason, he had been keeping this thing—friendship?—with Jaden a secret from those closest to him. Didn’t that make him feel like a shit? But he tamped it down, far. He deserved a little of this, a small thing no one else knew. His own corner of the world which brought him giddy, full feelings.

And it was okay because Danny knew once Jaden left to go back to Boston, he wouldn’t feel so complete and full again.

With that depressing thought, Danny walked back out to his gazebo and continued working and dreamed and indulged in those same happy thoughts to his heart’s content. Taking advantage of what he had now was the best option he had.

About Risking It All 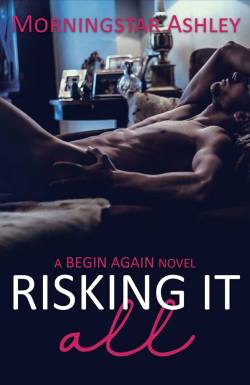 Jaden King was raised in Boston to a wealthy family that taught him what love and hard work is. He has a challenging and rewarding career until everything was turned upside down. What was once a promising future has quickly become a frightening and unknown reality. After months of dealing with the fall out on his own, he decided getting away–or more realistically, running away–to White Acre and his best friend sounded like the perfect plan.

Danny Keegan is a laid-back man with simple tastes and an even simpler life. He adores the little town of White Acre where he grew up, he loves his parents, and he enjoys his uncomplicated life.  He’s always told himself the fact that he’s a closeted gay man in a conservative, parochial town wasn’t an issue and coming out of the closet wasn’t necessary. But with the addition of Jaden in his life he realizes as happy as he is, he could be happier and the future of a love of his own doesn’t seem so out of grasp as it always had.

When Jaden and Danny meet, their chemistry is undeniable but playful flirting doesn’t mean anything. They start spending all their free time together, and what started as a simple friendship quickly turns into something much more than either saw coming. But, Jaden carries a secret that could end it all before it even begins. And though Jaden is scared to tell the truth and risk everything that has come to mean so much to him, he knows that he can’t go on without laying himself bare, leaving Danny with an important, life changing choice to make. His content little life or what could be the love of his life.

Will Jaden’s truth be too much for Danny, or will Danny decide a life out in the open, full of love, laughter, and passion is worth risking it all?

Morningstar Ashley is a transplant from the Yankee-controlled territory of New York, and now finds herself in the heartland of cowboys and longhorns—Texas. Armed with her imagination, wit, and trusty sidekicks in the form of her two crazy kids, devoted dorky husband, big lap dog, and rambunctious cats, Morningstar spends her time reading the books she loves, crafting her own characters, and arguing the merits of hot chocolate over the bitter brew known as coffee. (Hot chocolate wins, FYI.)

After a lifetime of trying to get people to realize her first name wasn’t Ashley, Morningstar decided the best way to settle the debate was to put her name on a book cover. Now she find the accomplishment of publishing so satisfying her mind won’t stop creating stories of love across the spectrum of LGBTQA+.