Posted on October 30, 2018 by thebloggergirls

Jake had no idea what to do as everyone craned to see what Doug was shouting about.

Jake doubted he would be so delighted when he discovered Kyle’s custom-made tail was still in the changing room.

Natalie grabbed Jake’s arm and pulled him away from the crowd. “Is it true?”

Jake rolled his eyes. “Doug’s just playing along for the show.”

Natalie snorted. “Doug barely pulls his weight at work. I doubt he’d do anything of the sort. Now, tell me the truth.”

“I knewKyle was holding his breath too long for a human when he swam in the tank. He almost beat the world record and he didn’t seem to be struggling at that.”

“Can you help them?” Jake asked.

“By doing what?” Natalie replied. “This is a great opportunity for us.”

“Well, until now, we’ve had Kyle playing the part of a merman, complete with his fake fins. Now we can show the world real mermen. Imagine how many visitors we’ll have when word gets out.”

Jake glared at the woman he had foolishly trusted with his lovers’ secret. He put it down to his panic and hoped he could repair the damage. “Kyle and Finn are notexhibits in your aquarium.”

Jake pushed her aside and ran to the far end of the boat. Thankfully, she didn’t follow. “Medina!” he screamed, hoping she heard him at such a vital moment.

The goddess appeared before him and smiled. “What has you so frantic?”

“Kyle and Finn are exposed.” Jake pointed at the crowd behind him. “You have to do something. Please, can you wipe everyone’s memories or something?”

Medina frowned. “I don’t have that sort of power, not anymore anyway.”

“Before the Atlanteans were banished, I could have done what you ask. I had priests, devoted to me and me alone, and their loyalty fed my powers. Now I am but a shadow of the goddess I used to be.”

“Isn’t there anything you can do?”

“Wait… There might be one way,” Medina said. “You could become my priest.”

“But Kyle and Finn… I can’t leave them. They need me.”

“Of course they do. Becoming my priest isn’t like your modern kind. You can stay with your lovers and carry on as before. You’ll just be something more than you are now.”

“Those powers you struggle to deal with would be amplified,” Medina explained. “And you’ll have to make an offering at one of my temples. A proper offering, not perfume and flowers.”

“What sort of offering?”

“You’ll need to prove you know what love is.”

Medina smiled. “It might sound easy, but I think you’ll find it harder than you think. So, Jake, do you accept my offer?”

“And if I do, you’ll be able to undo what’s happened?”

“Faster than you can blink.” 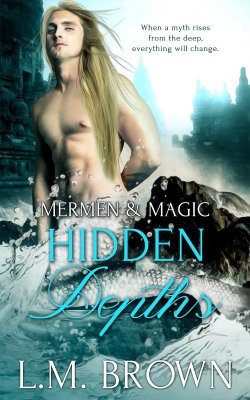 Lost beneath the ocean, Atlantis has become a myth. When it rises from the deep everything will change for Kyle, Finn and the merpeople.

Jake Seabrook, a human descendant of Medina, the Atlantean Goddess of Love, never asked for magical powers. Unfortunately, not only does he have them, but they are also growing stronger as more of the Atlantean gods wake from their long slumber.

When Jake develops the power to hear the thoughts of anyone thinking about love, lust or sex, it is strange and embarrassing, but also reveals cracks in his relationship with his mermen lovers, Kyle and Finn. If they are going to continue to live as a ménage, they will have to learn to be honest with each other.

With Jake’s powers out of control and their relationship on shaky ground, the last thing any of them need is a crisis in the sunken city.

The Atlantean gods want to regain the powers they lost when the Atlantean people were banished from the city, but the solution will leave the mer who live in the city no choice but to evacuate and search for a new home or risk exposing the existence of the mer to the whole world.

Kyle and Finn return to Atlantis to help with the evacuation and insure the safety of their families, but time is not on their side. When Atlantis rises, the consequences could tear apart their ménage forever.

L.M. Brown is an English writer of gay romances. She believes that there is nothing hotter or sweeter than two men in love with each other… unless it is three.

When L.M. Brown isn’t bribing her fur babies for control of the laptop, she can usually be found with her nose in a book.