Posted on December 27, 2018 by thebloggergirls

Come Back by CF White 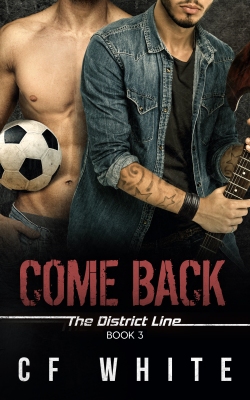 The bigger you become, the harder you fall.

Sebastian Saunders is a rising rock star. Jay Ruttman is a Premier League football player. Their year-long relationship is hot commodity. Hounded by the press and fans alike, the lovers struggle to keep their private lives private.

Flying high in the charts and having Jay by his side, Seb is finally living his dream. But Jay’s new, promising career is threatened when a horrific injury on the pitch has him side lined—not only in the game but also in his relationship with Seb.

Jay’s crippling self-destruction spirals out of control, tearing them apart. To move forward, both men must learn to leave their past behind—not so easy when it keeps coming back to haunt them.

Can their hard-fought relationship survive the ultimate test?

This is the concluding part to the District Line series where the full-time whistle could signal an end to their turbulent journey… or is it just the beginning?

Brought up in a relatively small town in Hertfordshire, C F White managed to do what most other residents try to do and fail—leave.

Studying at a West London university, she realised there was a whole city out there waiting to be discovered, so, much like Dick Whittington before her, she never made it back home and still endlessly searches for the streets paved with gold, slowly coming to the realisation they’re mostly paved with chewing gum. And the odd bit of graffiti. And those little circles of yellow spray paint where the council point out the pot holes to someone who is supposedly meant to fix them instead of staring at them vacantly whilst holding a polystyrene cup of watered-down coffee.

She eventually moved West to East along that vast District Line and settled for pie and mash, cockles and winkles and a bit of Knees Up Mother Brown to live in the East End of London; securing a job and creating a life, a home and a family.

Having worked in Higher Education for most of her career, a life-altering experience brought pen back to paper after she’d written stories as a child but never had the confidence to show them to the world. Having embarked on this writing malarkey, C F White cannot stop. So strap in, it’s gonna be a bumpy ride…

As part of this blog tour, CF is giving away an ebook of Kick Off (The District Line #1)!! To enter, just click the link below!

One thought on “Release Blitz: Come Back by CF White + Giveaway!”