Posted on February 2, 2019 by thebloggergirls

Nic steered his boat out toward the open water of the Atlantic, or what the Selkies called the Great Sea. While it was rough this morning, he welcomed the jarring waves. It reminded him how powerful the ocean could be. It would calm once the winds died down. He had dropped a string of lobster pots on the way out and would be back out tomorrow to pick them up once they had time to “soak.” He had another string he needed to pull this morning, but he also needed to spend some time net fishing, so he could pay some bills once he sold his catch. But before heading back, he would take a head-clearing swim.

He understood exactly what Marlin meant when he said swimming felt like freedom. Nic felt the same way and enjoyed being in the water just as much.

A soothing swim was needed especially after waking this morning to find his bed empty next to him. The prince had snuck out sometime in the early morning hours, though he’d left a note. One that simply read, “Thank you. ~ M.”

Maybe he should be thanking Marlin instead. He had gone through a gamut of emotions that day a few years ago when he came across Kai and Luca outside of Meesha’s house. Seeing the male he loved with another had been utterly…

Nic had told himself time and time again not to fall in love with Kai. That Nic was only a means to an end when it came to the eldest son of King Solomon. That Kai had traditions he was obligated to follow as a Selkie prince and heir to the throne. But no matter what, he couldn’t help falling for his tall, dark and handsome lover.

He knew Kai would eventually find his omega, his fated mate. But he had hoped Kai would continue to visit him afterward, to continue their relationship whether he had a mate or not. Was that selfish of him to wish that Kai wouldn’t be satisfied with Luca?

But he had still hoped.

Though, he should have known better because during their time together, the prince never stayed long in Nic’s bed. Kai didn’t linger, he didn’t spend a lot of time cuddling or talking after sex. He never promised Nic anything.

Still, Nic hated to admit that. He had always wished and dreamed that Kai would say to hell with all his obligations and take Nic as his life-mate.

But that was just plain foolishness. He knew it now. Luca was perfect for Kai, though Nic hated to admit that, as well. He still found it a struggle to be happy for the couple.

Over the years that bitterness dulled, and he’d taken others as lovers, including some hybrids, but none ever compared to Kai. There was something about an alpha Selkie male that scratched Nic’s itch.

Unfortunately, Marlin also knew just where to scratch. It was dangerous getting involved with the younger brother of Kai. He knew in the end he’d end up hurt and disappointed once more. Their spending time together would never result in a happily ever after.

It couldn’t. No, the sons of King Solomon could only bond with their fated mates. Or at least an approved omega the Selkie Seekers presented if their fated mate couldn’t be found.

Nic would never be in either category. So, if he was going to allow Marlin to keep coming to his cabin, to keep spending the night like they had discussed during the many times they had rutted—as Marlin liked to call it— last night, he would have to keep any emotional ties out of it. He would have to keep it “just sex.”

Unfortunately, he wasn’t sure if he could do that.

About The Selkie Prince’s Forbidden Mate 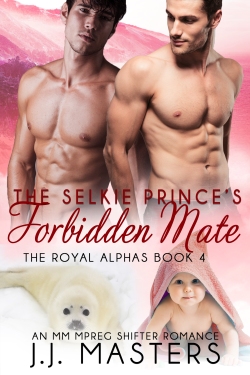 Secrets, lies and a forbidden bond that could change the fate of a kingdom.

Marlin, Selkie prince and fourth alpha-born son of the King of the North, desires someone he shouldn’t. While taking a human lover is not quite forbidden, the one who caught his eye happens to be his brother’s scorned former lover. Nevertheless, every time Marlin’s around the man, he finds Nic hard to resist, even though his attitude can be frustrating. However, Marlin likes a challenge, and Nic’s a challenge he’s willing to tackle.

Nic has been bitter ever since the firstborn prince, Kai, broke off their affair abruptly years ago. To become involved with Kai’s younger brother could be just as heartbreaking because Marlin, like Kai, is obligated to find his fated mate and produce heirs. Something Nic can’t do. However, neither can fight their mutual attraction.

When a traitor escapes, Marlin’s skin is stolen, and danger ensues, it’s Nic who becomes the prince’s hero. And it’s at that very moment that Marlin can’t deny their fate, whether it’s forbidden or not.

Note: A 60k-plus word m/m shifter mpreg story, this is the fourth book in the Royal Alpha series. Due to the “knotty” times in this book, it is recommended for mature readers only. While it can be read as a standalone, it’s recommended to read the series in order. And, like all of my books, it has an HEA.

J.J. Masters is the alter-ego of a USA Today bestselling author who writes hot, gay romance filled with heart, humor and heat. J.J. became fascinated with mpreg romance as soon as she figured out what mpreg stood for. She loves to write about “knotty” men!

You can join JJ’s FB Group here or her newsletter here to keep up with exclusive content and news.