Trix wasn’t the least bit surprised to find that the rest of the felines on the Pleasure Station were as furious as he was to find themselves homeless.

Brak, who had never been shy about holding back his opinions, stood in the middle of the dock, shouting abuse at the humans as they urged everyone onto the waiting ships. “Fucking arrogant humans, coming in here and telling us how to live our lives. If they had to survive on cream and milk they wouldn’t be so quick to judge us. They’re turning us out of our homes to starve.”

Even though he had never liked Brak, he couldn’t help agreeing with his assessment of their situation. Too many space stations had no feeding felines policies and many species were in the process of outlawing prostitution as well.

A group of avians who had clearly been visiting the station stood near their ship, listening to Brak rant. One of them drew away from the rest and approached them. “We’ve got room on board for three of you.”

“As much cream as you want.”

The avian laughed. “What do you need those for?”

“You’ll be travelling with us, and as for clothes, you’re hardly going to need those. We prefer our felines to be naked.”

Trix stepped forward. “I’ll come with you.” The words were out of his mouth before he could stop them.

Brak gave him a nasty sneer. “These avians clearly prefer cocks, not pussy.”

A second avian approached. “I’ve never fucked one of those before. Let him come.”

Trix considered that at least there was no longer any danger of pregnancy for him. It was already too late for that. He grabbed his trunk and dragged it over to the ramp.

“Is this all your stuff?” the second avian asked.

Trix glanced at the ship. “Do you have room for more?”

“I’ll go fetch the rest.” He hurried back to his rooms and gathered together all of his pillows in a sheet with the corners tied together. Fearful that they would leave without him, he raced back with his load, and boarded the ship.

He found Brak on board along with a third feline, a female named Cheri.

“Got everything?” the avian asked.

“Your room is on the lower level at the far end of the corridor. The three of you are sharing.”

Trix wasn’t surprised, but Cheri appeared disappointed. Brak was apparently too busy flirting with the pilot to notice.

With his pillows in his arms, Trix clambered down to the lower level in search of some peace and quiet. He realised, as he put together a cosy nest in the corner that he hadn’t even asked the names of his hosts.

Cheri came into the room behind him. “You avoiding Furyne because you’re dual-gendered too?”

Trix smiled at Cheri. “The avians seem to find us something of a novelty.”

Cheri flopped onto one of the beds—at least there were three of them crammed into the room—and rested her head on her hands. “I hope they aren’t expecting much action from my cock. I took the supplements once or twice to see how they worked, but quite frankly I’ve no interest in taking them again. I don’t know how you male dominants put up with the damn things, always getting hard at entirely the wrong moment.”

Trix chuckled. “Do you have any supplements on you?”

“Then you probably don’t need to worry about it. I doubt our hosts know enough about us to realise that female dominants need to take them to get an erection.”

Trix curled up on his pillows and closed his eyes. A rumble came from behind him and the ship lifted for take-off. “Any idea where we’re going?” 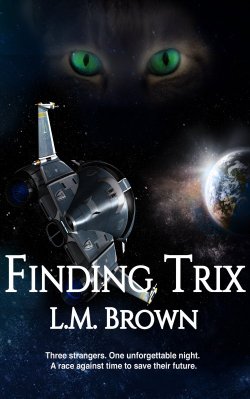 Trix is one of many felines who sells his body on the Pleasure Station, a space station devoted to entertainment, gambling, and the pleasures of the flesh. He’d never intended to spend his life there, but the place offers him security, regular cream, and over time it has become his home.

As a dual-gendered feline, Trix knows the risk of pregnancy is high, and sets his prices equally high to discourage customers. Trix never imagines that Delta, a canine with credits to spare will call his bluff.

When Delta pays for himself and Farron, a naïve avian from the swan clan, to spend the night with Trix, the three of them forge an unexpected bond, one that leaves Trix pregnant.

As a swan avian, Farron is incapable of being unfaithful to his mate, even when the bond is only partially formed. To complete the mating ritual, Farron must find Trix before the babies are born, or the bond will break forever, and Farron will be forced to live a life of celibacy.

When the Pleasure Station falls under new ownership, and the humans ban prostitution, Trix is left homeless. Upon hearing about this, Delta too races back to find Trix.

Both Farron and Delta arrive too late. Trix has vanished and the race is on to find him before he gives birth. Only then will they know if the bond they formed on their first night is strong enough to last a lifetime.

When L.M. Brown isn’t bribing her fur babies for control of the laptop, she can usually be found with her nose in a book.

One thought on “Finding Trix by L.M. Brown: Exclusive Excerpt!”