Joe’s hands wrapped around my waist, so large in comparison to my body in general, and lifted me off his lap like I weighed nothing. He plopped me onto the couch next to him and adjusted his erection in his jeans. “Why?” I purred, instantly climbing back into his lap and straddling him.

“Because you’re gonna make me come before we even get started,” he said, voice husky as he grabbed my hips and tried to stop me from grinding against him again.

Sem was running a bit late. He’d had some event thing at work, and he’d texted me that it’d be another thirty minutes until he’d be home. So, I’d started working Joe over. Getting him nice and ready for all the trouble that we were about to get into. Which wasn’t that difficult considering he’d been sporting a hard-on since he’d seen me in my skirt. Hell, he’d been half-hard when he walked into my apartment. From talking to him, I knew that this was a treat for him. Something he was too scared to engage in regularly. I was his escape, and I was more than happy to be it.

“What kind of red-blooded American man doesn’t want a lap dance?” I asked him sweetly, tossing my arms around his neck and shifting on his lap.

His fingers tightened on my hips, and he let out a breathless laugh. “You’re tryin’ to make me come!” he accused me, huffing.

“Duh.” Leaning into him, I brushed my lips against his and flicked my tongue across them, tasting the beer on his mouth. “It’s fun.”

“I should put you over my knee,” he threatened. But there was no bite to his words. He wouldn’t do something like that unless Sem told him. Such a big man yet he seemed almost terrified of Sem. He did what my brother ordered him to do and was hesitant to go that far beyond it.

“Mm, do it,” I murmured, giving a hard wiggle downward and rubbing myself against his crotch. “I’d like that.”

“Oops. That’s Sem. Saved by the bell, hm?” I teased as I slipped off his lap and made my way over to the laptop. It was low enough that I could get on my knees in front of it, clicking the start call button with an eager little bounce.

Sem came into view instantly, seated in his usual chair with a glass of what was no doubt very expensive scotch in his hand. It was clear that he had taken the time to get settled in from rushing home. Probably enjoying making me wait. “Hey,” I murmured, tilting my head as I sat back on my heels. “How was your event?”

“Do you really care?”

“Is Joe there?” he asked, swirling his drink and taking a sip of it as he sat back.

I leaned to the side so he could peek at him over my shoulder and nodded. “Yep,” Joe said. “We’ve been waiting.”

No apologies. Sem just looked over my shoulder and then back to me. “Joe!” It was a sharp command that made my toy rise from the couch and walk over to stand behind me. His hand went to the top of my head, and he bent down so that Sem could see him.

“I want you to take the camera and show me what Nate looks like,” he said. “I want to see that outfit I paid for.”

“And what about me?” I asked sweetly, twisting at the edge of my skirt.

“I want you on your back. On the floor.”

Sem got off on this. I could tell. He’d changed a lot in the two years since we started our very illicit relationship, but some things never changed. He liked control, and he liked bossing people around. Liked when they listened to him. It got him off probably as much as actual sex. We were his little playthings, and he was going to have fun with us.

Fuck, I loved it.

Moving away from the camera, I crawled on my hands and knees over to the blankets that I had set up. I didn’t even have to glance over my shoulder to know that both of them were watching me. I bit my lip, rolling onto my back and stretching out. One knee bent, arms curled over my head, throat exposed. “Come and get me,” I purred. 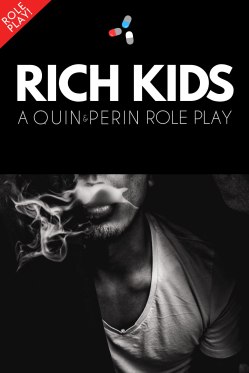 My name is Nathaniel Preston. Second son of the Preston estate.

I’ve been raised to be perfect, to be ahead of every game, not to do wrong. Sem, my crass and vain older half-brother, is the complete opposite of me. All he seeks is his next high. To get there, he cheats, blackmails, and seduces.

Which wouldn’t be a problem, if one day he didn’t decide to tape me in a very compromising position…

As a pair of genre rebels, Quin and Perin—from the US and Germany—are constantly maneuvering time zones and plot bunnies to whip up Gay Novels. Expect plenty of heat and elevated smut. With a dash of drama, a pinch of sweet, and a hefty amount of kink on the side, they serve up stories that will leave you full and satisfied.

As part of this blog tour, Quin is giving away a $10 Amazon Gift Card!! To enter, just click the link below!