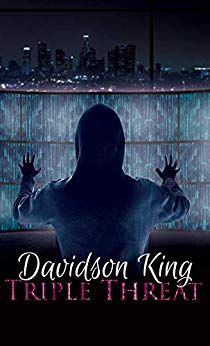 Blurb: Lee, Jones, and Ginger deal with dangerous situations and mounting stress daily working for the most powerful assassin organization in the world. All of those things seem like a walk in the park compared to the friction that sparks between them. When all three are assigned to the same job, ignoring the heat from the inferno of desire becomes impossible.

Lee is a master at deciphering codes, skilled in hacking complicated systems, and never misses a target, even from over fifty miles away. His feelings for Jones and Ginger, however, may be the first code he’s unable to crack.

Jones deals in absolutes, but the road to his past is paved with bodies and regrets. Getting Lee to acknowledge the pull they both feel toward Ginger may be the hardest mission he’s ever had to face.

Ginger struggles to cope with the overwhelming guilt that accompanies this new job. Falling for these hired killers will be a risk—one that could wind up with him losing in the end or gaining everything he’s ever wanted.

As the three work together to take down a human trafficking ring—and save a desperate soul—time is of the essence. Their lives are on the line as mysteries unfold and unexpected encounters throw them off course. Will Lee, Jones, and Ginger let doubts come between them, distracting them from their mission and blocking any hope of love? Or can they face the toughest challenge of their lives and become…a triple threat?

For anyone that knows me, they know I’m not a fan of menage stories. They’re hard for me to read because usually they’re smutty (and not the good smutty) and then there’s the whole someone feeling ‘left out.’ In this one, Ginger does feel a little left out but Jones and Lee do a good job of trying to show Ginger that he’s an important part of their relationship. I loved Ginger as a character, especially since he’s a comic lover!! He’s spunky and quick-witted and I didn’t really realize how young he was but I liked that he was still kind of innocent because previous books made him seem like he was a hardened street boy… which he kinda is but kinda isn’t. Add to that, the mission they go on really puts Ginger in the spotlight and I liked seeing things play out and really seeing Jones and Lee using their skills and doing some good. For assassins, I just really love that they have a moral compass.

In past books, I was really looking forward to Jones and Lee’s book because they had such great chemistry throughout the series and I was intrigued with how things would be patched up between them since they’ve been on the outs lately. It was interesting to see why Jones and Lee were drifting apart especially since they’re both enigmas. I liked that they realized their relationship was missing something but it annoyed me a bit that Jones denied any feelings for Ginger in previous books and it annoyed me that Lee was so jealous and hurt over Jones obviously being attracted to Ginger when Lee was attracted to Ginger as well. It made me confused on how they couldn’t talk about something being missing from their relationship but then over a few days, they want to have a throuple with Ginger and expect all their issues to be settled? I don’t understand how Ginger is going to help with them communicating when that’s obviously one of their issues. Because, honestly, Lee and Jones were more open and honest than Ginger was in this book so I’m not sure how the relationship will work if Lee/Jones are going to rely on Ginger to fix them.

While I enjoyed this one, I didn’t feel the chemistry between Jones/Lee or with ‘all’ three of them at the same time. It always felt like either Ginger/Jones or Ginger/Lee. There was never just Lee/Jones and when Lee/Ginger/Jones were together, I still didn’t feel like they were ‘together’ because Lee/Jones were focusing on pleasing Ginger. I’m not sure if I’m explaining this right but I felt like the romance was more centered on Ginger than it was on cementing the relationship between all three of them equally. Ginger was the focal point and while I loved him, I wanted to see Jones and Lee reconnecting considering they’ve been on the outs and I wanted to feel like the relationship was on equal footing in the emotional department. Also, it was just too smutty for me especially when I wanted to learn more about their characters and building the foundation for their relationship.

All in all, I did really enjoy this one. I didn’t think I would but I loved Jones and Lee in previous books and I loved Ginger even more in this one. The three of them together was interesting to read and the mission they go on was intriguing. I’m looking forward to the next book and really hoping it’s finally Poe’s. If you haven’t read this series yet, you definitely need to read books 1-5 before reading this one but definitely give it a go!