Posted on May 7, 2020 by thebloggergirls

Arthur leans back in his chair and exhales like a balloon deflating.

It’s the first time I’ve admitted to myself just how I feel about him, about me, about the whole fucking situation. The look on his face is unreadable, and I’m not sure if I should say something or just let him be, so I decide to reach into my bag and pull out two oatmeal cream pies.

“I’m sorry,” Arthur says, his eyes still closed. “I don’t know why I waited all this time to say something.”

I throw one small plastic-wrapped cake at his chest. His eyes fly open and he looks down at his lap.

“It’s not like we’re in our eighties,” I say. I fumble with the package before ultimately tearing it open with my teeth. “Or on our deathbeds, or something.”

Arthur sighs. “Yes,” he says. “But I’m sure it hasn’t been easy seeing me with all of these girls and shit.” He’s angry now, and I’m not sure if it’s something I’ve said or done.

“Look,” I say. “I know I’m not the only one in love with you. You’ve had the whole school after you ever since you moved here. I’m not a dummy. I always thought you were straight, that you saw me as a friend only. Until that day when you let me kiss you.”

His eyes meet mine, his look now very readable.

Idiots. We’re both idiots. For the past few years we have been dancing alone because we were too afraid of stepping on each other’s toes, and all it would’ve taken was a five-minute discussion. I sigh again and open another pie. Eating my feelings seems like a good idea at the moment.

“I’m not here to give you a lecture on sleeping with half of Avalon, Arthur.”

“Two girls,” he corrects me. “I’ve only ever slept with two girls, and I haven’t been with anyone since last summer. Since my dad found us.”

Thankfully I don’t have to respond to this because Gwen and her co-worker burst out of the front door, the screen barely moving fast enough to allow their hasty departure.

“Jesus fucking Christ,” Gwen says. “I hate working in the evenings.” She stretches her arms and pops her neck. I cringe at the sound. Her co-worker bumps Gwen’s fist with their own, and they leave. I think their name is Jo, but I’m not sure, because I’ve seen them only once.

“Well,” she says, smiling at the both of us. “Did you like the cards? What did the reading say?”

Arthur laughs and picks one up. “I definitely did.” Then Gwen looks at me.

“And what about you?” she asks. “I mean, it looked like you had your hands full out here, so…”

I realize that I had been too caught up in my feelings to even look at the deck, so I wipe the cream off my hands and reach for the first card. I turn it over. On the card are the words TWO OF CUPS, and below the writing is a picture of two men giving each other sixty-nine. I place it down on the table and roll my eyes.

Arthur reaches for it, and I cover his hand with mine before he can turn the card over. “Nuh-uh,” I say. “Bad luck to let someone see the cards you’ve drawn for yourself.”

Arthur slides his fingers into mine, and Gwen watches us with anticipation, like she’s critiquing a performance or something.

“Okay,” she says, finally. Even though she’s practically shouting. “What fuckin’ card was it?”

I roll my eyes, ignoring her optimistic jab. “What about you, Arthur? What card did you draw?”

“Death,” he says.​ The words printed on the card are as plain as day. “What does that mean? Am I going to die?”​ 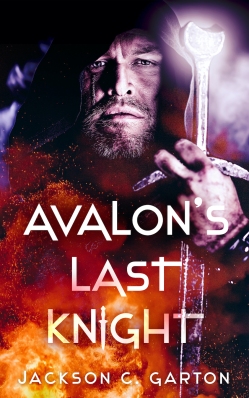 After being away at college for a year, Lance Lotte returns to Avalon, Kentucky for the summer. Due to self-imposed isolation, he hasn’t seen anyone in months, but all that changes when Arthur–his closest friend, and the love of his life–shows up to his new job with a big toothy grin. The last time Lance saw Arthur, the two had not parted on the best of terms–with Arthur’s father finding them asleep on his bed, and physically wrenching Lance away from Arthur. The incident put a strain on their relationship, and convinced Lance that they will never be allowed to be together.

But then Arthur sends Lance a text one night, telling him that he’s in love with him–a text Lance rereads at least a hundred times, but isn’t brave enough to mention when they’re alone. Lance has fought his attraction to Arthur for the past five years because as a budding brujo, he believes in magick, destiny, and fate–that everything happens for a reason–that nothing good will come of an Arthur Pendragon-Lance A. Lotte pairing.

With the help of his sister, Gwen Lotte, Arthur, and two twins visiting their uncle for the summer, Mordy and Morgan Lafayette, Lance learns the true meaning of friendship, and just how far he will go to save the people he loves.

Equal parts dandy and disaster, Jackson C. Garton is a writer and LGBTQ activist hailing from the hills of Appalachia. He currently resides in Central Kentucky with his husband, child, and four cats. When Jackson isn’t reading or writing, you can find him examining people’s natal charts, researching queer history, planning his next ghost hunt, or milling about the supernatural section of his local bookstore.

As part of this blog tour, win a “Y’All Means All” Pride sticker and an Avalon’s Last Knight bookmark!! To enter, just click the link below!