The Deeper You Go by Logan Grey: Exclusive Excerpt & Giveaway!

Posted on May 8, 2020 by thebloggergirls

Exclusive Excerpt from The Deeper You Go

As soon as the door clanged shut behind him, silence shrouded the room as Bay leveled him with a stare. Full of warmth and heat and things Travis was too afraid to put a name to.

“What?” he asked, and glanced down at himself as if trying to find what he was staring at.

Bailey’s lips twitched before he stepped forward and motioned past Travis to the vacant practice room. Gaze still locked on Bailey’s, he took a step back, almost losing his balance. Reaching out, Bailey palmed both of his shoulders and forcefully moved him backwards, catching Travis securely when he stumbled over his own feet.

A soft chuckle tumbled out as he gripped Bay’s arms to balance himself. But that chuckle evaporated as Bailey slammed the door behind them and locked it with a loud click. Travis gulped, but heat raced beneath his skin, rushing through him in a wave of sparks. They tickled over his flesh just like Bailey’s touch did as he stroked his hands down Travis’s arms. As soon as his fingers drifted away to tease at his waistband, Travis grinned and leaned forward, wrapping his arms around Bay’s neck and pressing their lips together.

Bay’s hands pressed against his waist and held him to the wall as they traded velvet kisses drenched in heat. Travis threaded his fingers through Bay’s blond hair and gripped tightly, tilting his head to the side to deepen the kiss. Goosebumps broke out and sparked over his skin as Bay teased underneath his shirt, and then dipped his fingers inside his waistband. Travis pulled back with a teasing smile.

“Here?” he asked, and shot a paranoid look toward the door.

Bay smirked. “What, rock star, haven’t done anything this scandalous before?”

Rolling his eyes, Travis flexed his fingers and raked them over the back of Bay’s neck. “Not in a school.”

“No? Well, I guess there is a first time for everything,” Bay teased.

About The Deeper You Go 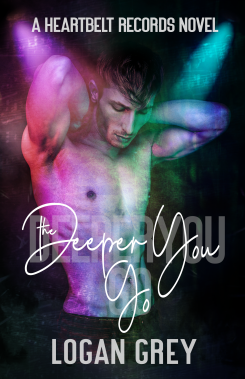 Travis Cherry’s record label disowned him in almost every way, shape, and form when he was outed in the media.
The thing that sucked?

He still owed them an entire album. But that didn’t meant he’d make it easy on them.
They were the reason he was there, in that nightclub—the gay nightclub— shaking his ass and making a complete fool of himself.
They were also the reason he met Bailey.
And this is their story.​

Logan resides in Tennessee, convinced her southern twang is part of her charm. With two cats and a dog, her hands are full, and not just of treats like her pets would like to believe. As a full time author, she dedicates all of her time bringing to life different characters and developing new worlds for her readers to lose themselves in. And more often than not, she loses herself in them, which is her favorite place to be: with a cat in her lap, a snack in hand, and voices in her head.

As part of this blog tour, Logan is giving away a $20 Amazon Gift Card!! To enter, just click the link below!