“Okaaay, fine,” Bailey grumbled, dragging the first word out into a whine.

Travis chuckled at his pout, but he didn’t put up a fight as Travis led the way out of the front door, the warm night air welcoming after the crowded party. Tugging out his phone, he scheduled an Uber and held onto Bailey.

“It feels so fucking good outside,” Bailey shouted with enthusiasm, glancing up at the sky. “The North is always cold as hell.”

“I can confirm that,” Travis agreed with a chuckle.

“I love the West Coast.”

Bailey squeezed his hand and glanced over with a droll expression. “I know, but we’re still out west. I love it here. What are we waiting on?” He rocked back onto his heels as he asked the last question, glancing around as if trying to figure it out for himself.

He rocked forward onto the flat of his feet and stumbled, and Travis tightened his grip to catch him before he face-planted. A chuckle escaped and he couldn’t help but adore drunk Bailey.

“You’re goofy,” Travis remarked, and tugged him close. He stumbled into Travis’s side and he used it to his advantage, wrapping his arm around Bay’s waist and holding him to his side.

“You’re hot,” Bay retorted, smirking as he returned the embrace, sliding one of his hands into Travis’s back pocket and squeezing.

Travis coughed out a laugh and tried to slide away, but Bay only sidled closer and wrapped his other arm around Travis. They were pressed chest to chest, and even though Bay’s eyes were a little unfocused, he had a dumb grin on his face when he looked down at Travis, and it made his stomach flip in excitement.

“Glad you think so,” Travis teased and met his gaze.

His brows furrowed. “Think what?”

Lips twitching in amusement, Travis reminded him, “That I’m hot.”

Travis slid one hand to Bailey’s wrist behind his back and gripped tight, trying to tug his hand away as headlights flashed over them. “We can explore that more on the bus. For now, our ride is here.”

About The Longer You’ll Stay 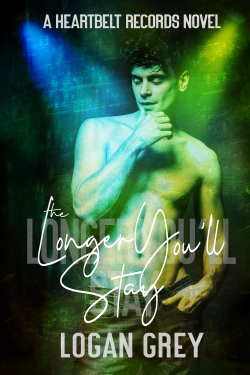 Trading small town diners and familiar faces for skyscrapers and sold out venues, Travis Cherry took the risk of a lifetime by leaving Holdengate. Alone.
Or so he thought.

When the tour kicks off, he finds he’ll be sharing his bus, and the stage, with the one he left behind to pursue music.

The life of a rock star is not all bright lights and a sea of cheering fans, and personal demons aren’t the only thing Travis and Bailey have to conquer to survive the cut-throat world.

*This is book two in a duet of the Heartbelt Records series.
This is an M/M story containing mature content.

Logan resides in Tennessee, convinced her southern twang is part of her charm. With two cats and a dog, her hands are full, and not just of treats like her pets would like to believe. As a full time author, she dedicates all of her time bringing to life different characters and developing new worlds for her readers to lose themselves in. And more often than not, she loses herself in them, which is her favorite place to be: with a cat in her lap, a snack in hand, and voices in her head.