Exclusive Excerpt from Confessions of a Gay Curmudgeon

What was this? Dr. S talking so early in the session?

“Yes, but… I didn’t want to like it. I mean, it happened so suddenly.”

Of course, Dr. S loves it when I talk about sex. Practically creams in his pants, I’m sure. I can tell, because he doesn’t move a muscle when sex comes up. Becomes still, almost afraid to take a breath. Talk about getting his undivided attention. My other woes? Yeah, yeah, he’s the sympathetic therapist, but I’d hear him shifting a leg, coughing, even unwrapping a candy when I talk about the other stuff.

Is that all he cares about? It’s not all about sex, is it? I started talking about Gio’s personality, and smile, and wit, and how warm it felt when he hugged me.

Dr. S shifted in his chair. Ah-hah. He was getting bored already.

“Relationships are complicated, aren’t they?” I said, still trying to move away from the S word. “I mean, Gio and I loved each other. At least I think we did. Of course, what do I know about love? I didn’t come out until late. I was a good Catholic boy, remember? The nuns in the school where I went didn’t talk about love and romance. That should be a requirement in schools, don’t you think, Doctor? Some discussion of love?”

Dr. S was really squirming in his chair now. And coughing. I was just waiting for the candy unwrapping to start.

“So that’s why it was great when Gio used to fuck the shit out of me! Man, his big cock inside me made up for all those Catholic moments!”

If I could only say that. It would wake Dr. S up, wouldn’t it?

About Confessions of a Gay Curmudgeon 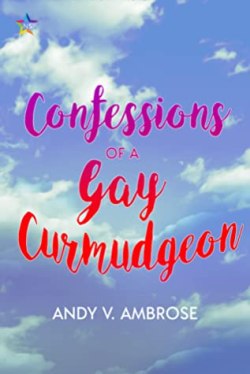 Confessions of a Gay Curmudgeon recounts the adventures of Viktor, a fifty-year-old gay man in New York City trying to get back into the land of the living after the breakup of a twelve-year relationship. The novel examines the lives of a group of middle-aged gay men, exploring new facets of their sexuality while dealing with all the changes middle age brings.

Andy V Ambrose grew up in the Boston area and moved to New York City after college. He worked in book publishing for many years, wearing many hats: Editorial, Copyediting, Proofreading, and Production. This is his first novel featuring Viktor, a fifty-year-old gay man trying to get back into the world of the living after the end of a twelve-year relationship. To relax, Andy loves to ride his bike, read, watch foreign and independent movies, and travel. He’s only made it to three continents so far but hopes to visit the rest soon. He lives in New York City.