Posts Tagged With: Bearly There

Posted on February 29, 2016 by thebloggergirls 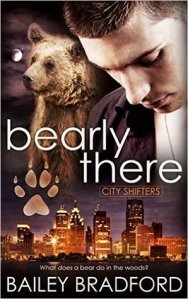 Blurb:  One surly bear and one bunny boy…what could possibly go wrong?

Jagger Osterman is having a bad day. In fact, he’s not the slightest bit impressed with 2015 at all. His job is on the line, and it’s not like he loves being a marketing wunderkind, but he has to do something to pay the bills. If he had his way, he’d just vanish into the mountains and live out his life as the black bear he yearns to shift into. Unfortunately, Jagger doesn’t have the time to let his beast run. He has responsibilities that he can’t walk away from.

Kevin Kelly could tell Jagger a thing or two about bad days, bad years, and just out and out bad luck. He made the mistake of smarting off to a curandera years ago and hasn’t been able to shake the curse she put on him yet. There’s not an area of his life that hasn’t been screwed up in one way or another. As a pronghorn shifter, he’d be okay on his own in the wild. Sure, there’d be predators, but Kevin had come to realize the worst predators were the human kind.

But he can’t shift. He’s been solidly bound to human form since being cursed.

Two men, both trapped in their own ways. They’re about to find out that freedom comes in many forms.
END_OF_DOCUMENT_TOKEN_TO_BE_REPLACED