Blurb:  It’s not the size of the dog in the fight, it’s the size of the fight in the dog.
As a child, Tom Delaney did the best he could to protect his mother from his abusive father, but her eventual suicide left him a guarded and wary man who’s still carrying around a metric ton of baggage.

At Bannon’s Gym, Tom learned how to take back his power, and found love with fellow mixed martial arts fighter Travis Gallagher. Yet Tom can’t bring himself to take their relationship to the next level. Not if moving in together means leaving behind Gloria, his surrogate mom, who’s desperately ill.

When Gloria’s son, Eddie, hires an out-of-work nurse to care for Gloria, Tom is out of excuses—and afraid he’s being pushed out of his family of choice. That fear explodes in a violent sparring session that leaves Travis with a broken nose and Tom on the brink of getting booted out of Bannon’s Gym for good.

When tragedy strikes, Tom realizes it’ll take more than fists to conquer his fears, or he risks losing everything—his fighting career, his family, and the man he loves.

Warning: Sweat- and testosterone-drenched alpha males ahead! More angst than an entire season of Downton Abbey! Wear a helmet—this could get messy!
END_OF_DOCUMENT_TOKEN_TO_BE_REPLACED

Posted on December 19, 2014 by thebloggergirls

Cameron is the best—and most sought-after—escort in New York. He has only rule: never let anyone in. But when he picks up ad man Trevor Barclay in a hotel bar, Trev’s shy smile and soft green eyes have Cameron forgetting all the rules. Their steamy encounters leave Cameron shaken, breathless – and falling in love for the first time in his life. But how can he tell Trevor the first man he’s been with in sixteen years sells himself for a living?

Diva Michelle is the hottest drag act in the Manhattan bar scene. But behind the diva is Mike, a lonely man nursing a crush on the Icon’s hot new employee. Ryan’s not just another pretty face – the skittish, fearful young man’s holding back secrets. He may find comfort in Mike’s bed, but he’s not sure if he can trust Mike with the pain of his past.

A Fool for You

Brian Barclay is trying to make it in the New York music scene, but he doesn’t count on his boyfriend Kit stealing all the songs they wrote together. Kicked out of his own band, Brian has no choice but to ask his estranged father Trevor and his partner Cameron for help. Brian and Cameron quickly clash, and when tensions at home escalate, Brian finds himself leaning on sexy blues guitarist Chase Aubrey. Chase and Brian make beautiful music onstage and off, but when Chase’s past threatens their newfound happiness, Brian fears he’s about to be played for a fool yet again.
END_OF_DOCUMENT_TOKEN_TO_BE_REPLACED

Ready For Some Hot Fighting Men?

Are you ready for some Devil Dogs? Or Navy SEALs? Or Army Rangers? Or any other kind of hot fighting man with a heart of gold?

Up until last year, I’d never written anything military-themed that actually showed combat scenes. I’ve never served in the military. My dad served in the army during WWII, but aside from that, my family has no history of military service. What if I got the details wrong? The prospect of writing combat seemed strewn with so many pitfalls, I decided it was best to avoid it.

Then I wrote two Navy SEAL books with the awesome L.A. Witt, and well, I couldn’t fudge the research any more. In fact, I actually enjoyed the process. I found myself astounded, impressed and touched by stories of the men who put themselves through months of hell training for this highly dangerous job. And I knew I wanted to help tell their stories in my own way.

So I invited a few other authors to join in, and voila! A brand-new box set was born!

The set won’t be available until October 13th, but until then, feel free to drool over that handsome guy in the dog tags and wifebeater (who’s showing us his heart, btw) and get ready for some hot, rough & ready military man love this October!

There’s nothing like a man in uniform, and sixteen of today’s hottest gay romance authors are celebrating military heroes and the men brave enough to love them.

These brand-new novellas feature all branches of the service and offer something for every reader. Almost 300,000 never before published words!

Cat Grant – The Only One Who Cares

Brien Michaels – Are We All We Are

Cat Grant lives by the sea in beautiful Monterey, California, with one persnickety feline and way too many books and DVDs. When she’s not writing, you can usually find her watching movies or TV (Supernatural and The Vampire Diaries are among her favorite shows), singing along to her favorite band (30 Seconds to Mars), or fantasizing about kinky sex with Michael Fassbender and/or Jared Leto.

We’ve got a BUNCH of giveaway winners today!

So, the winner of a banner of Unconditional Surrender signed by various authors is… END_OF_DOCUMENT_TOKEN_TO_BE_REPLACED

Posted on August 15, 2014 by thebloggergirls

Is this really GRL’s fourth year? I remember the very first GRL in New Orleans in 2011. I’d never been to NOLA before, but despite the kind of heat and humidity I’m not used to, I fell in love with the city.

Every year GRL’s been in a different city I’ve never visited before. Albuquerque was a lot of fun. So was Atlanta. And now, Chicago, which I’ve only ever passed through on my way to another city.

GRL’s become a yearly mile marker for me. Another year as a published author, another (however many) new books. GRL 2011 was the first time anybody actually recognized me. I remember walking into the opening event in that huge ballroom. I was exhausted and  hungry from traveling all day, so I headed straight for the food table – until one very sweet reader spied my badge and shrieked, “OH MY GOD, IT’S CAT GRANT!!!”

I picked myself off the floor, signed her book and stood talking to her for about ten minutes while my stomach slowly consumed itself. But you know what? I didn’t even care. In my mind, I was going, “These are my people! No more getting shunted aside, treated like a red-headed stepchild like at RT or RWA. GRL’s a place where authors who write what I write are treated like rock stars.”

Is it any wonder I look forward to it every year?

There’s nothing like a man in uniform, and sixteen of today’s hottest gay romance authors are celebrating military heroes and the men brave enough to love them.

These brand-new novellas feature all branches of the service and offer something for every reader. Almost 300,000 never before published words!

This Bundle will become available October 13, 2014.

Cat Grant – The Only One Who Cares

Brien Michaels – Are We All We Are

Cat Grant lives by the sea in beautiful Monterey, California, with one persnickety feline and way too many books and DVDs. When she’s not writing, you can usually find her watching movies or TV (Supernatural and The Vampire Diaries are among her favorite shows), singing along to her favorite band (30 Seconds to Mars), or fantasizing about kinky sex with Michael Fassbender and/or Jared Leto.

Cat’s giving away a signed (by as many of the authors as possible) banner (to be mailed after GRL) to one lucky commenter! Just comment on this post and you’re entered. Contest starts now and ends on Thursday, August 21st, 2014 at 11:59 p.m.

Don’t forget to include your email address with your comment!

Blurb:  Home may not be what he remembered, but it might hold what he needs.

An abusive father drove Tom Delaney away from Lincoln Beach. Now that he’s back to settle his family’s affairs, he’s finding that not even the good things he left behind are the same. The old neighborhood is a dangerous slum. Eddie’s diner is on its last legs. Gloria, who looked after him like her own son, is seriously ill.

His only refuge is Bannon’s Gym, where Danny Bannon nurtured his talent for mixed martial arts. Bannon’s also harbors Travis, his ex—as in ex-sparring partner, ex one-night stand. The man who, the last time they faced off in the ring, left Tom with a broken jaw and a concussion.

The sparks are still there, in the ring and out of it. But when Travis’s own troubles quite literally explode, their only chance to build something solid on their broken past could go up in flames.

Blurb:  Richard Carr has the kind of life most people would envy. Partner in a major Los Angeles law firm, married to the man of his dreams, Richard seems to have it made – except for the lie he’s been living for the past forty-odd years.

But starting his – her – transition doesn’t provide the relief Renee had hoped for. Her business partners demand that she go back to dressing as a man at the office, while Robert, her husband and fellow Dominant, can’t conceal his shock as the man he married disappears a little bit more every day.

Their one true point of connection remains in the dungeon – in the person of Jase Hewitt, the submissive they both share. But when a devastating tragedy shatters Jase and sends him running to his Masters for comfort, it quickly becomes apparent that Robert’s love for Jase extends far beyond their Dom/sub roles…

And Renee faces a choice – abandon her journey toward becoming the person she truly is inside, or risk losing the man she loves.
END_OF_DOCUMENT_TOKEN_TO_BE_REPLACED

Early Review: The Only One Who Matters by Cat Grant & L.A. Witt 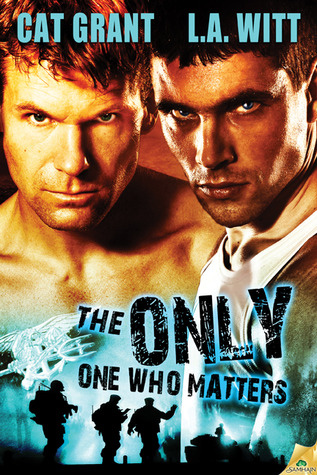 Blurb: No man—and no heart—left behind.

Months after a bullet ended his SEAL career, Senior Chief David Flint doesn’t know which is worse: struggling to adjust to life as a civilian, or watching his lover, Lieutenant Commander Josh Walker, leave for one deployment after another.

Missing the career he loved—and knowing all too well the danger Josh faces—doesn’t help. And as Josh walks out the door for another assignment, David can feel their relationship cracking under the strain.

With so little time between assignments, Josh has no idea how to fix things with David. One thing he’s sure of, though…if they don’t find a way to resolve the rising tension between them, there’s a storm coming they might not be able to weather. But he plans to give it his best shot—when he gets home.

Assuming he makes it home alive…

Warning: Contains plenty of smoking-hot sex between two dudes who just wanted to be SEALs, not deal with all this romance crap. They went and fell in love anyway, and now have to figure out how to make it work while saving the world and teaching their puppy not to beg. END_OF_DOCUMENT_TOKEN_TO_BE_REPLACED