Posted on October 6, 2015 by thebloggergirls 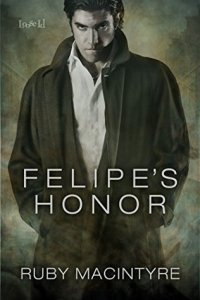 Blurb:  Evil is plaguing the streets of Omaha. Someone has been stealing innocent humans from the streets and turning them into mindless killers, mad with their thirst for blood.

Charlie is one of those innocents. Stolen at a young age, he’s long since lost any hope of having a normal life. He’s diseased now. A monster. How he managed to escape the Hunters, he will never know. But one thing is clear: the Hunters want him back. Desperately.

Felipe, the general of the Spanish vampire army, rescues a vampire runt from a group of Hunters threatening him with vile torments. The last thing he expects, or wants, is to learn the weakling is his destined mate. When he starts to see past Charlie’s physical appearance, what he feels threatens everything he has believed about himself for centuries.

Charlie knows Felipe doesn’t like him, so he tries to fight the inexplicable attraction he has for the virile general. Felipe tries to avoid Charlie at all costs, but everything changes when he’s threatened with losing Charlie forever. Then he’ll have to fix what he destroyed before it’s too late.