Blurb: For refusing the crown and renouncing his title, Prince Lier was eternally banished from the planet of Arden. After finding asylum in a Deep Space colony, he took a position in a bordello as the Master of Ceremonies. During Lier’s exile, Emperor Sardius I conquered Arden and slaughtered Lier’s people. From the destruction arose a new species dependent on blood. Seizing the opportunity, Sardius praises vampirism and blueprints mass blood manufacturing with Lier’s blood as the key. Lier is not only the last of his kind, but his blood is strangely addictive.

On a mission to capture Lier, Commander Raze, son of Sardius, can’t help but try it for himself. When he does, he experiences strange flashbacks of himself with Lier. Tense relations between captor and captive blur the line between past and present.

During the perilous journey to Arden, forces opposed to Sardius attempt to rescue their lost prince. Raze’s mission changes from retrieval to survival. Soon it becomes clear that, although neither man recognizes what the other has become, this meeting is not their first. And by no means will it be their last.

END_OF_DOCUMENT_TOKEN_TO_BE_REPLACED

Blurb: Halden Blake was a good soldier and a good man. He never intended to be a hero, and he definitely never intended the events that landed him in intergalactic politics. Now, three presidential terms later, Halden must decide if running for office again is worth five more years of putting his own life on hold.

Isaac Knox has been President Blake’s public liaison from the start, an ally and friend through difficult times. Halden has always carefully resisted thoughts of more, and Isaac has never given any hint of returning his guarded attraction. But when Halden finds himself struggling with questions about his own future, Isaac makes a surprising offer that could change everything.
END_OF_DOCUMENT_TOKEN_TO_BE_REPLACED

Someone from Dade’s past is at the root of everything he’s suffered. No way can he let them get away with what they’re planning, but Dade isn’t sure he can stop them on his own. If he doesn’t let go of his isolation and risk the pain letting others in will bring, he’ll never save Caeorleia in time.
END_OF_DOCUMENT_TOKEN_TO_BE_REPLACED

Book Review: A Moon Too Far by S.A. Garcia

Blurb: Stranded on a moon smelling of rotten eggs with tunnel ghouls attempting to eat him, Captain Tanner N’tirant meets a legend and finds the truth is a lot hotter than the myth. A scorned mother landed him on this rock, and while sleeping with her son wasn’t the finest decision he ever made, trusting Denzantalen, a gene-spliced hybrid thought to be extinct, might be the best decision of his life.
END_OF_DOCUMENT_TOKEN_TO_BE_REPLACED

Book Review: From Johann To Tannenbaum by Ashlyn Forge 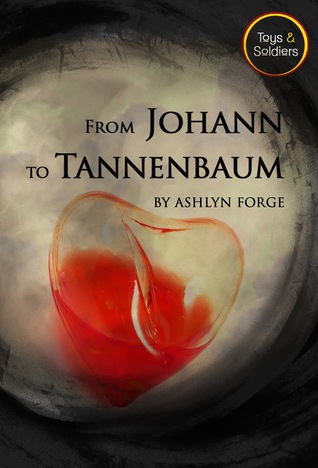 Blurb: Johann Andreas IV is a rich loser who has a raw deal in life. He is handsome, yet with a poor self-image, clever, but still uneducated, and despite being the heir apparent in his grandfather’s will, he’s about to be thrown out with nothing.

In the underground colony of his birth, two things matter the most to its denizens: a name, which will guarantee his wealth and status, and a designated branding tattoo, the only thing allowing Colony-Dwellers to live safely underground. Johann has one year to secure both.

His grandfather’s unexpected passing has propelled Johann to the foreground of his family. He must learn the family business within the year. He’s up to the challenge but one thing stands in his way; his mother has plans of her own…and they don’t include him. END_OF_DOCUMENT_TOKEN_TO_BE_REPLACED