Blurb: For refusing the crown and renouncing his title, Prince Lier was eternally banished from the planet of Arden. After finding asylum in a Deep Space colony, he took a position in a bordello as the Master of Ceremonies. During Lier’s exile, Emperor Sardius I conquered Arden and slaughtered Lier’s people. From the destruction arose a new species dependent on blood. Seizing the opportunity, Sardius praises vampirism and blueprints mass blood manufacturing with Lier’s blood as the key. Lier is not only the last of his kind, but his blood is strangely addictive.

On a mission to capture Lier, Commander Raze, son of Sardius, can’t help but try it for himself. When he does, he experiences strange flashbacks of himself with Lier. Tense relations between captor and captive blur the line between past and present.

During the perilous journey to Arden, forces opposed to Sardius attempt to rescue their lost prince. Raze’s mission changes from retrieval to survival. Soon it becomes clear that, although neither man recognizes what the other has become, this meeting is not their first. And by no means will it be their last.

END_OF_DOCUMENT_TOKEN_TO_BE_REPLACED

A goddess can only help so much, especially when another immortal would see them part. If the two stubborn mermen want a life together, they will have to learn to communicate and fight for their love.
END_OF_DOCUMENT_TOKEN_TO_BE_REPLACED

Blurb: When Sebastian Angel moves to Napa to be with his mate Storm Winthrope, he never expects to find his third mate so soon. But their blue-haired fae mate, Noah, is being held captive by an evil master. When Sebastian searches a nearby vineyard for Noah, he senses great evil all around. The more Sebastian visits the vineyard the more he changes. He starts to see things that aren’t real.

An experience from Storm’s past makes him want things he doesn’t think he should want as leader of his pride. In lying to Sebastian and denying his true desires, he may push Sebastian away for good.

Noah is afraid of being with his mates because of the things he experienced at the hands of his master, but he wants to trust his mates with his heart and body.

Can these three learn to trust each other and give each what the others need? Or are they doomed from the start?
END_OF_DOCUMENT_TOKEN_TO_BE_REPLACED

Blurb: Secrets from Gabriel’s past haunt him and hold him back from claiming his mate. His internal struggle has always caused him to keep to himself. But this struggle is giving Taylor mixed signals, and a whole lot of pain. Gabriel won’t tell Taylor that they are mates, but he doesn’t know that Taylor already knows.

The pain from his mate’s rejection causes Taylor to spin out of control and in return he lashes out at everyone, including his best friend Jesse.

Taylor holds a big secret that he tries to deal with alone. With new friends, late night parties and a lot of alcohol, he decides to leave the pack, Jesse, and Gabriel behind to keep his secret hidden. But by keeping his secret from the ones he loves, it will cause them to lose him forever.

Can Gabriel face his demons in time to save Taylor? Or will he be too late and spend eternity alone?
END_OF_DOCUMENT_TOKEN_TO_BE_REPLACED

Blurb: Who knew that a summer thunderstorm and his lost little boy would conspire to change single dad Cayce D’Amico’s life in an instant? With Luke missing, Cayce ventures into the woods near their house to find his son, only to have lightning strike a tree near him, sending a branch down on his head. When he awakens the next day in the hospital, he discovers he has been blessed or cursed—he isn’t sure which—with psychic ability. Along with unfathomable glimpses into the lives of those around him, he’s getting visions of a missing teenage girl.

When a second girl disappears soon after the first, Cayce realizes his visions are leading him to their grisly fates. Cayce wants to help, but no one believes him. The police are suspicious. The press wants to exploit him. And the girls’ parents have mixed feelings about the young man with the “third eye.”

Cayce turns to local reporter Dave Newton and, while searching for clues to the string of disappearances and possible murders, a spark ignites between the two. Little do they know that nearby, another couple—dark and murderous—are plotting more crimes and wondering how to silence the man who knows too much about them.
END_OF_DOCUMENT_TOKEN_TO_BE_REPLACED

Blurb: Carson Locke is a Tabula Rosa vampire—a dangerous rarity in the world of vampires. With one bite, he can wipe clean a vampire’s mind, creating a mindless drone. Because of this, Carson has spent his entire twenty-three years sheltered at home. That changes, however, when his entire family is murdered. On the run and near death, Carson meets Commander Lincoln Samuels, a beautiful vampire who tries to heal him. In doing so, Carson is bonded to Lincoln and turned into something the vampire world has never seen.

Lincoln is a Sanatore vampire with the ability to heal other vampires. He heads a team in the New Vampire Justice police force in Utica, NY. Late one night, he’s called to a local Vampire Blood Market where a starving Tabula Rosa vampire is about to be executed by one of his officers. Feeling a strong connection to Carson, Lincoln wants to heal the broken man despite knowing the risk in doing so—it could destroy Lincoln and cost him the chance to love again. And he soon discovers there’s a greater evil threatening to take Carson from him.

Can two vampires who have loved and painfully lost in the past learn to trust one another, defeat the evil rising against them, and dare to love forever?
END_OF_DOCUMENT_TOKEN_TO_BE_REPLACED

Posted on August 12, 2014 by thebloggergirls

Blurb:  Melysious Intent serves as the back story of Melysa Makenzie, a mind reader. It takes place before she’s thrust into the hellhole which is Ledger Headquarters.

Recovering from physical scars that pale in comparison to the jagged emotional reminders left behind by her drug addicted boyfriend, Melysa Makenzie meets a breathtakingly handsome man named Gabriel Soileau who is intent on showing her a love she has never before known. Due to a life altering encounter, ArtWorx, the advertising firm by which she is employed as a graphic designer, scores a once in a lifetime contract with Gabriel’s revolutionary new airline. When Melysa, not only walks away with the grand prize, but also the clients heart and soul, her co-workers are none too happy. As she works to expand the HydroAir brand, outside forces work to take her down. Is her life at risk simply because of jilted ex co-workers, or is it because she is a telepath?
END_OF_DOCUMENT_TOKEN_TO_BE_REPLACED

Reviewed by Susan65 and JustJen 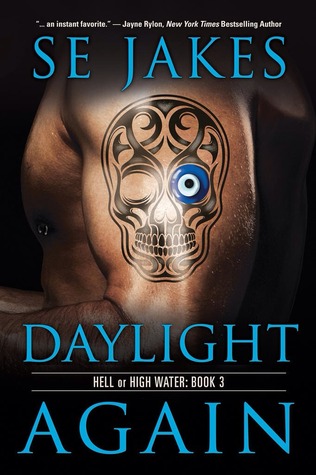 Blurb: Before Prophet Drews can have a future, he must first put his past to rest.

Prophet Drews is a man on the edge, and he’s pulling Tom Boudreaux, his partner on the job and in real life, right over with him. When his old CO calls in a favor, Prophet asks Tom to join the off-the-grid rescue. But the mission raises all of Prophet’s old ghosts: CIA assassins, the terrorist Sadiq, and most importantly, John—traitor, former teammate, and Prophet’s first love.

To help bury those ghosts for good, Prophet and Tom gather the members of Prophet’s former SEAL team . . . and a spook named Cillian who’s been tailing Prophet for years. In the process, Prophet is forced to face his team’s shifting loyalties, ghosts who refuse to stay dead, and scariest of all, his own limitations.

With everyone’s lives in danger, Prophet and Tom must unravel a tangled knot of secrets, including their own. Prophet must decide how much to reveal to Tom, while Tom must decide how far he’s willing to go to help Prophet lay his ghosts to rest.