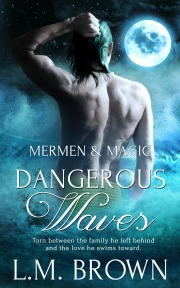 A goddess can only help so much, especially when another immortal would see them part. If the two stubborn mermen want a life together, they will have to learn to communicate and fight for their love.

Review: This is one of four (I think, 2 others are written so far) and I haven’t read the earlier two. This might have affected my interpretation of what I read, but I don’t think I was lost. It’s a very complex and well-developed plot with significant world building that borrows on Greek Mythos but adds in new twists and turns.

One thing that I both appreciated but found distasteful was that the author stuck by the historical view of Gods/Goddesses as very self-absorbed and selfish beings who manipulate those in their stratosphere to their own gain. Instead of a beneficent being who uses their powers for good, Cara is not entirely bad but she is definitely not in this to help her oracles one bit. She has set them up in a horrible situation with no way out and no options. That didn’t sit well with me.

No matter what he wanted, Kai has to live in Atlantis, he can’t go to land and it’s only on land that he can be human, and it’s only as a human he can have an orgasm. That sucks! When he meets and learns that Dax is to be his bonded mate, I kept thinking – well now that just sucks for both of them! Dax can either choose to be unfaithful or they can both live celibate lives for no reason other than the Goddess chooses this to be so. (We find out later why the rules exist and we find out later that there are some options, but for most of the book, this is the fate our MCs face and it’s a giant drag!)

There was so much going on in this story and here is where I might have been more interested had I read the earlier two stories, but it seemed to occupy a lot of the book in ways that didn’t directly move our MCs’ relationship forward. Or it did, but in a very drawn out, long way.

I appreciated the world building and thought it was interesting, but the strict rules and the rather prison like world the oracles live in made me uninterested in reading more about them or their situation. Even with the happy twist that develops it still feels like a terrible way to live a life and I didn’t see what Kai got out of it which just kept twitching my “this isn’t fair!” switch. (The other oracles who are the MCs in the other stories have similar rules.)

As a result, I was happy to have read this and found part of it pretty interesting, but beyond feeling like all parties involved were puppets at the hand of some pretty unlikable Gods and Goddesses, it just didn’t move me much.

Dax seemed resigned to the fact that if he wanted someone to settle down with he was obliged to find Kai appealing because it had been so decreed by Minerva. Instead of any real bond, it just felt sort of… obligatory.

So, while I felt the writing was good and parts of this were interesting, it didn’t strike me as particularly romantic and thus it wasn’t as appealing to me as it could have been.