Blurb: A war between angels and demons has left Earth desolate and ruined.

Rom struggles to support his father and sister in the patch of wasteland they’ve claimed as home. Feeling restless, Rom takes to exploring when he can, and is shocked when he stumbles across another survivor.

Years of isolation have left Yuli feeling despondent. That all changes when they encounter Rom, who is unlike anyone they’ve met before, a brilliant light of hope in this mostly extinguished world.

As Rom and Yuli grow closer, both gain a renewed hope for something more in this desolate land.

But in this dangerous world, trust comes hard and demons are never far away.

Rom and Yuli is a 15k word post-apocalyptic urban fantasy novella featuring male and non-binary protagonists and is a loose retelling of Romeo and Juliet with a hopeful ending.
END_OF_DOCUMENT_TOKEN_TO_BE_REPLACED

Blurb: An aggressive super-flu pandemic wipes out a majority of the population over the course of one Christmas holiday—and brings Tobin and Kyle together. For almost a year, they’ve been trekking across the country from Colorado toward a sanctuary in upstate New York. Kyle’s survival skills have kept them alive, and Tobin wants to repay the man he loves with a very special gift of his own making. He sneaks off in search of the last few pieces… only to get himself and Kyle kidnapped by a desperate stranger. With their journey to New York on hold—possibly indefinitely—they’ll need to accept that home isn’t always defined by a place as much as the person you’re with.
END_OF_DOCUMENT_TOKEN_TO_BE_REPLACED

Ryo Ishikawa has survived for years on his own, living on the edges of what used to be the city of Tokyo. But when his beautiful sister, Kirei, returns home, Ryo knows that the two of them won’t make it alone. The only option is to join a crew, and the biggest, baddest of them all are the Owari.

The Owari, however, have a grueling initiation process. If Ryo wants to be accepted by them he will have to not only make it to the end of the hunt, but also impress his hunter, Hikaru… and Hikaru is not an easy male to impress. He will expect more than just strength and guile from Ryo… he will expect complete submission…
END_OF_DOCUMENT_TOKEN_TO_BE_REPLACED

Blurb: Ten years ago the Black Rapture transported thousands of people, seemingly at random, from Earth to the strange, inimical world they call the Labyrinth. Will Teller was one of them. Surviving that meant joining an army and becoming better at killing than he’s comfortable with. It’s enough upheaval for anyone’s life. The only problem is, apparently no one told his commanding officer that.

Pride, and heart, stung by abandonment, the icily controlled General Nathan Kearney has decided that Teller can either find the wayward lover, or he can take his place in Nathan’s bed. That’s pretty good motivation for a straight guy, only thing is – Teller’s sexuality seems to have gone a bit Magic-8 Ball on that issue. Suddenly Nathan’s starting to look pretty good, and the only question is whether or not Teller wants to be the consolation prize?
END_OF_DOCUMENT_TOKEN_TO_BE_REPLACED

Blurb: Abby is a Ranger, part of an elite group who defend the border against Reapers—humans infected with a parasite that turns them into mindless cannibals. Rangers are immune to Reaper infection, and as one of the only female Rangers, Abby is expected to settle down and breed more Rangers—a fate she’s keen to avoid. When she’s ambushed on the plains, she’s ready to go out with guns blazing—until a mysterious, handsome cowboy rides to her rescue.

Jake has his own motives for helping Abby, beyond aiding a damsel in distress. He’s a Reaper, and while he’s learned to wrest control of his mind from the parasite, the effects won’t last without a permanent cure. And he needs Abby to get it.

Abby and Jake are natural enemies and unlikely partners. But when their search reveals a conspiracy between Reapers and the rich industrialists who own the mountain cities, they must work together to find the cure—or lose the border, and each other, forever.
END_OF_DOCUMENT_TOKEN_TO_BE_REPLACED

Blurb: It is the year 2441. A deadly virus has swept over the planet, short-circuiting cybernetic implants, killing billions. In the aftermath, the newly formed state of Eden is led by the one newborn that survived that dreadful day, Uriel Noah of the House of Zion—the Guiding Light. Unbeknownst to all, Uriel lives in a gilded cage, deprived of basic affection, used as a pawn, craving freedom and love.

Cyborg Raze Hartman is the leader of the resistance. His kind—cyborgs with a high cybernetic coefficient—were hit hardest by the virus, the few survivors crippled and enslaved by the purist system. Struggling to keep his father alive, Raze resorts to investigating the Guiding Light, the symbol of cyborg oppression. What he finds changes his life, and Uriel’s.

After sneaking into a purist ceremony, Raze sees past Uriel’s facade of strength and aloofness. He sees the lonely young man behind the mask of the Guiding Light. The instantaneous attraction between them is literally electric. But a chasm separates them, as wide as the difference between flesh and metal, and the secrets of Uriel’s past may be the undoing of them all.
END_OF_DOCUMENT_TOKEN_TO_BE_REPLACED

Early Review: Through the Veil by Christi Snow

Blurb: 58 years ago a gorge opened up from Mobile, AL to Quebec City, Canada to split the United States into the Western States (WS) and the Eastern States (ES).

40 years later a fog rolled in on the WS that they called the Veil. Within twelve hours it formed an impenetrable wall between the two sides.

It’s been 18 years since anyone has known what’s happening on the other side of the Veil.

Now, Lori, an Other, in a desperate attempt at escape from the ES’s torture and experimentation, has crossed the Veil and found a world beyond belief.

Marcus is a Warrior, but when Lori collapses at his feet wounded and exhausted, he knows he has to protect her. But seeing that she’s the first person he’s seen in 18 years without wings, he’s worried about what her appearance means for his people and the world they’ve created since the Veil fell.

Two new societies: one built on a respect for the natural order of nature and the world, the other built on mistrust and corruption. Can they learn to co-exist once again?
END_OF_DOCUMENT_TOKEN_TO_BE_REPLACED

Book Review: Pursued by the Wandering Spider by Jackie Nacht

Blurb: This wandering spider will pursue his mate, knowing he’s walking into the very heart of danger.

Boone has kept it no secret that he wants Julius for his own. Hell, he’s pursued the guy relentlessly from the moment he saw an assassin lying in wait to harm Julius. Now, Boone has one mission, to go with his friend, TL, and unite the fire ants to their cause of getting loved ones and Mission Territory back. However, there’s no way Boone will leave his mate, knowing that even at the hive, Julius could be taken from him. So, now, he will have no choice but to bring the man he loves into the heart of danger.
END_OF_DOCUMENT_TOKEN_TO_BE_REPLACED 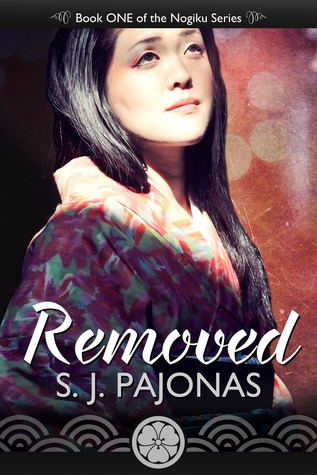 Blurb: Twenty-year-old Sanaa Griffin is about to get more than she bargained for when she wishes for love, happiness, and excitement on New Year’s Eve. Ripped from the job she always loved, she is reassigned to work for mysterious Mark Sakai and spy on the corrupt leaders of her city. War looms on the horizon, and Sanaa must help Sakai determine the key players and their weak spots before it’s too late.

Mark Sakai has many plans for Sanaa that will take her into a web of lies and danger, and her only protection is to learn to defend herself. But defense training under the watchful eye of Jiro, a strong and enigmatic young man she has a crush on, was not what she expected. Between falling in love with Jiro and the information she is gathering, Sanaa realizes Sakai is holding back secrets about her family and her deceased parents, secrets as to why she was chosen for this job, and learning the truth puts all of humanity in jeopardy.

REMOVED is the first book in a captivating post-apocalyptic series that harnesses the cultures and traditions of Japan and sweeps them into the future between Earth and a faraway land. END_OF_DOCUMENT_TOKEN_TO_BE_REPLACED

Book Review: The Sting of the Death Stalker Scorpion by Jackie Nacht

Blurb: Sometimes, to protect your mate, you need to run before coming back to fight another day.

From the moment the scorpion Wilder laid eyes on the sick anti-venom Leif, he knew his life would be changed. Now, Wilder will have to use the hands with which he killed so many enemies to heal the man meant for him.

Since Leif started to come around, Wilder has always been there to help. While Wilder is known as ruthless, Leif sees past that to the gentle venom that takes care of him daily.

When betrayal happens, Leif and Wilder will have to run with their friends. However, things are unexpected in the wild and new allies are found.
END_OF_DOCUMENT_TOKEN_TO_BE_REPLACED