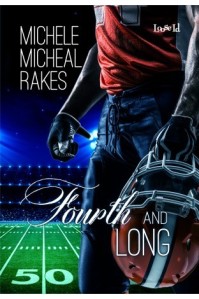 Blurb: Irus Beaumont, cornerback for the Highlanders, has an issue with his nemesis: wideout for the Pirates, Jackson McCoy. Partly jealous over Jackson’s skill and ability to scrub coverage, Irus also struggles against an unbearable attraction to the receiver. Firmly ensconced in the closet, Irus also has a no football player rule, leaving his desires for Jackson unfulfilled. Anti-gay sentiment in the league keeps Irus closeted, even though he’d rather be out and proud.

When Jackson McCoy suffers a gay bashing at the hands of his team mates after winning the national championship, he finds himself traded to the Highlanders. Spring training brings out Jackson’s competitive nature, eliciting the aggression of his new team’s cornerback, Irus Beaumont.

In practice, Irus hurts Jackson badly. The injury places Jackson on the reserve roster. Jacks has plenty of time to contemplate his life, career, and his attraction to the sexy cornerback. Off to Orlando for the best rehab where guilt inspires Irus to call him every evening, Jackson can’t stop thinking about Irus, or what the season holds for his team.
END_OF_DOCUMENT_TOKEN_TO_BE_REPLACED

Posted on November 15, 2015 by thebloggergirls

Blurb: College football player Clark Stevens, a popular wide receiver with a potential NFL contract, has a few problems. He’s got a jealous girlfriend, a narrow-minded and controlling father, an attention problem, and an unexpected and powerful attraction to the trauma doctor—the male trauma doctor—who treats him for a broken bone.

Dr. Jody Williams is getting some really mixed signals. He can’t ignore how much he wants Clark, because it’s obvious Clark feels the same way. For the out and proud doctor, the solution seems very simple. For Clark, it’s not! His world is not gay-friendly, and the obstacles he’s faced have led him to deny his sexuality for years.

It’s the Super Bowl of disasters, no matter how you look at it. In the end, Clark has to decide if he’s going to stick with the only life he’s ever known or take a chance on a new one with Jody.