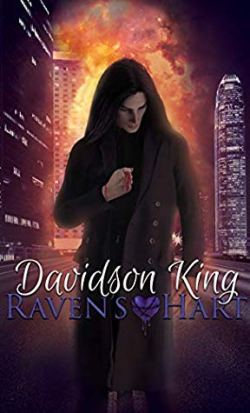 Blurb: Haven Hart stands on the edge of good and evil. Having balance between the two is the only thing keeping the town from crumbling to the ground. For years, one man has been charged with maintaining that balance. Poe.

The air of mystery surrounding Poe is one of necessity. He’s the keeper of secrets and for good reason. He’s stood alone against the most ruthless men and women, always hiding behind the curtain to help his friends defeat what seeks to destroy them.

Now, after all this time, the city he loves, the people he has protected, and the secrets he’s kept hidden are in serious jeopardy. Poe will need the help of his friends to fight the ultimate battle; not just save Haven Hart but everything and everyone he holds dear to him.

When the dust settles, will betrayals be forgiven? Will the city still be standing? Will Poe’s beloved be at his side or will everything crumble? One thing is for certain, everything will be tested, and questions will finally be answered. Raven’s Hart is the final installment in the Haven Hart Series.
END_OF_DOCUMENT_TOKEN_TO_BE_REPLACED

Posted on October 3, 2019 by thebloggergirls

Christopher Manos was a man who entered the room knowing he was powerful. He demanded the respect that came with it, too. His hair was slicked back, but there was a wave to it. He wore an expensive dark suit, and if it wasn’t for the soft look he gave whenever he was talking to Snow, he’d be scary. Snow wore a long shirt, jeans of some color, and sneakers. Total opposites in every way. Simon brought up the rear wearing clothes similar to Snow’s. His hair was just as dark as his uncle’s, but I had noticed his eyes were a lighter shade. There were many facial similarities to Christopher, but I suspected the ones I couldn’t place belonged to Simon’s mother who had passed of cancer when he was a baby.

“Good afternoon,” I said as I stepped closer to them, hand out hoping Christopher would shake it. He didn’t disappoint. “Hi, Simon.”

Simon lifted his head, his gaze leaving his phone for a moment. “Hey, Poe. You have a nice house. I had no idea you lived so far away.”

“No one did,” Snow mumbled but smiled when I shot him a glare. “What?”

“Pops says that whatever the reason means a long and dark explanation.” That earned him a light slap from Christopher and a chuckle.

“You go do what you’re doing there.” He gestured to Simon’s phone. END_OF_DOCUMENT_TOKEN_TO_BE_REPLACED