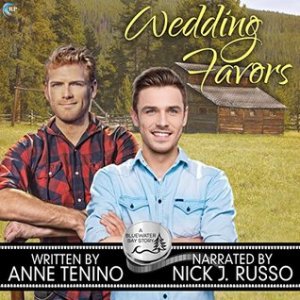 Blurb: Lucas Wilder’s best friend is a traitor. First, Audrey moved back to their hick-infested hometown, Bluewater Bay, and now she’s marrying a local. His own brother, in fact. And as her man of honor, Lucas gets coerced into returning for an extended stay. Although, between his unfaithful ex-boyfriend and his artist’s block, going home isn’t the worst thing that could happen. Even if the best man is Gabriel Savage, Lucas’s first crush, first hookup, and first heartbreak.

The only reason Gabe hasn’t been waiting for Lucas to return to Bluewater Bay is because he never thought it’d happen. Not that it matters now that Lucas is back—Gabe’s still a logger who’s never been anywhere (Canada doesn’t count), and Lucas is now a famous sculptor who’s been everywhere twice. Plus, there’s that shared past.

When Audrey asks Lucas to make her wedding favors, the only place to set up a kiln is at Gabe’s tree farm. Soon, they pick up where they left off twelve years before, then blow past it, discovering why neither of them forgot the other. Now they have to choose how much of their history they’ll repeat, and what future they’ll make together.
END_OF_DOCUMENT_TOKEN_TO_BE_REPLACED

Blurb:  There comes a time in every man’s life where he has to make a choice between what is right and what is easy.

Born and raised in Fort Worth Texas by open-minded parents, Dean Anderson realized early in life he was attracted to both sexes. Equal opportunity, he picked his lovers based on personality and common interests. He met Maggie in college, fell in love, got married and started a family. And they were happy…until they weren’t.

Adam Chase’s mother is South African, his father American military working at the US Embassy in Pretoria, South Africa. His parents’ positions in the South African and American governments awarded Adam dual citizenship, and he attended University in America, at Berkley. In America, Adam is lives openly as a gay man, something that could get him killed in his mother’s home country. He met his husband, Patrick Carter, at college and they too were happy…until Patrick died.

Two lives converge, and it would seem fate is giving them each a second chance at happiness, together. Dean stays in New York and moves into the apartment his son, Dusty, shares with his boyfriend David. He and Adam are quickly welcomed into All Cocks’ vastly growing family. And then one phone call changes everything.

The men of All Cocks are about to learn that death is just another part of life, a road everyone travels eventually. Choices are made, decisions that change their lives irrevocably. They rally together, drawing strength from each other as their close-knit family experiences the best and worst life has to offer. But that’s what families do, right?
END_OF_DOCUMENT_TOKEN_TO_BE_REPLACED

Posted on December 1, 2016 by thebloggergirls

Blurb: Nate has been in love with Quinn, his brother’s best friend, for as long as he can remember. But when he finally gets the chance to show Quinn how he feels, his heart gets broken in the most unexpected way.

Quinn doesn’t believe in miracles, especially not Christmas ones. When he decides to win Nate back he knows it won’t be easy. The last thing he expects is a health scare, a road trip and a vicious snow storm to work in his favor. In the end, a cabin in the woods turns out to be not only the shelter they desperately need, but also Quinn’s very own Christmas miracle.

END_OF_DOCUMENT_TOKEN_TO_BE_REPLACED

Posted on August 18, 2016 by thebloggergirls

Blurb: Malcolm Webber is still grieving the loss of his partner of twenty years to cancer. He’s buried his mind and feelings in his legal work and isn’t looking for another relationship. He isn’t expecting to feel such a strong attraction when he meets Hans Erickson—especially since the man is quite a bit younger than him.

Hans is an adventure writer with an exciting lifestyle to match. When he needs a tax attorney to straighten out an error with the IRS, he ends up on the other side of the handsome Malcolm’s desk. The heat between them is undeniable, but business has to come first. When it’s concluded, Hans leaps on the chance to make his move.

Malcolm isn’t sure he’s ready for the next chapter in his life. Hans is so young and active that Malcolm worries he won’t be able to hold his interest for long. Just when he’s convinced himself to take the risk and turn the page, problems at the law office threaten to end their love story before it can really begin.
END_OF_DOCUMENT_TOKEN_TO_BE_REPLACED