Book Review: The Well of Tears by R.G. Thomas 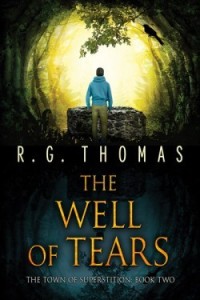 Blurb:  Thaddeus Cane is on the journey of his life. Having just discovered he is the son of a wizard and witch, he sets off on a quest to find his mother, who was cursed when Thaddeus was just a baby. He is accompanied by his father, Nathan; his new love, Teofil Rhododendron, the garden gnome who lives next door; and Teofil’s mother, brother, and sister. Though the world they travel through is familiar to him, they encounter a number of magical beings, some friendly and others quite deadly. When Nathan is gravely wounded, Thaddeus must choose between finding his mother and saving his father’s life.
END_OF_DOCUMENT_TOKEN_TO_BE_REPLACED

Posted on November 10, 2015 by thebloggergirls 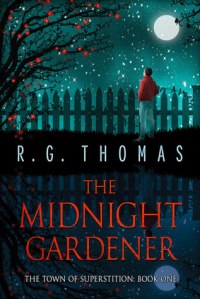 Blurb:  At fifteen, Thaddeus Cane has moved thirty-two times with his father. Each time he’s displaced without explanation, Thaddeus loses any friends he’s made. The name of their latest town is Superstition, but it seems normal enough, with one exception.

Thaddeus’s bedroom window gives him a view into the beautiful gardens next door. Every night after dark, an attractive guy around Thaddeus’s age appears to tend the plants. When Thaddeus visits his neighbor, he discovers not only how deep his interest in the other man runs, but also that Teofil, the midnight gardener, isn’t human. He’s a garden gnome, a revelation that will lead to more secrets coming to light and an adventure unlike anything Thaddeus ever imagined.
END_OF_DOCUMENT_TOKEN_TO_BE_REPLACED

Book Review: A Case of Spirits by K.J. Charles 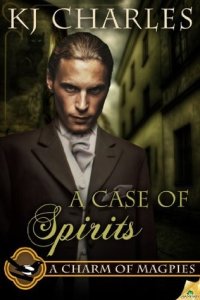 Blurb: None so blind…

As torrential rains wash away the stench of a London heat wave, another kind of wave is sweeping through the city streets. A rash of ghost sightings, followed quickly by madness—and horrifying, eye-melting blindness.

The outbreak hits close to home when Lord Crane’s manservant, Merrick, becomes the newest victim. Desperate to find the cause of the malady, Crane and his magician lover, Stephen Day, are in a race against time—to put an end to the magical assault and put to rest the painful memories resurrected by ghosts of the past.

Blurb: Can a desperate wizard and a bitter, disillusioned vampire find a way to build the partnership that could save their world?

In a world rocked by magical war, vampires are seen by many as less than human, as the stereotypical creatures of the night who prey on others. But as the war intensifies, the wizards know they need an advantage to turn the tide in their favor: the strength and edge the vampires can give them in the battle against the dark wizards who seek to destroy life as they know it.

In a dangerous move and show of good will, the wizards ask the leader of the vampires to meet with them, so that they might plead their cause. One desperate man, Alain Magnier, and one bitter, disillusioned vampire, Orlando St. Clair, meet in Paris, and the fate of the world hangs in the balance of their decision: Will the vampires join the cause and form a partnership with the wizards to win the war?
END_OF_DOCUMENT_TOKEN_TO_BE_REPLACED