Posted on February 19, 2016 by thebloggergirls 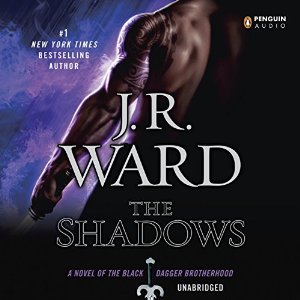 Blurb: Trez “Latimer” doesn’t really exist. And not just because the identity was created so that a Shadow could function in the underbelly of the human world. Sold by his parents to the Queen of the S’Hsibe as a child, Trez escaped the Territory and has been a pimp and an enforcer in Caldwell, NY for years- all the while on the run from a destiny of sexual servitude. He’s never had anyone he could totally rely on… except for his brother, iAm.

iAm’s sole goal has always been to keep his brother from self-destructing- and he knows he’s failed. It’s not until the Chosen Serena enters Trez’s life that the male begins to turn things around… but by then it’s too late. The pledge to mate the Queen’s daughter comes due and there is nowhere to run, nowhere to hide, and no negotiating.

Trapped between his heart and a fate he never volunteered for, Trez must decide whether to endanger himself and others- or forever leave behind the female he’s in love with. But then an unimaginable tragedy strikes and changes everything. Staring out over an emotional abyss, Trez must find a reason to go on or risk losing himself and his soul forever. And iAm, in the name of brotherly love, is faced with making the ultimate sacrifice…

Nikyta’s Review – Book: I’m really conflicted about this story. On one hand, I really enjoyed it with its twists and turns and there’s definitely some ‘edge of my seat’ moments. But on the other hand, I found I wasn’t invested in the Trez/Selena storyline (which is essentially the main part of the story) as much as it seems others were so I found the parts with them a little dull at times. I ADORED Selena and I’m still trying to process what happened with her but Trez… God, I just don’t like him at all. It’s a little weird because the Trez/iAm storyline is very similar to Phury/Zsadist and Z is one of my favorite brothers. But Trez was nothing like Z. I found him immature at times and completely selfish and not caring at all about anyone else. Yes, Z didn’t either but Z was dead inside…. Trez was not dead, he just didn’t want to face his life.

I won’t lie, though, I found the fact Trez wanted to take Selena on dates very sweet and I will say, out of all the couples, they’ve probably gone on more dates than any of the others (Aside from Xcor and Layla now). So, I did enjoy that in the story but I just wasn’t invested in them as much as I was in iAm and Maichen. But I was disappointed that iAm’s story doesn’t start until well into the book so I feel like I was cheated out of iAm’s story (granted, I shouldn’t be surprised at this point because it seems like most of the books leave me this way with the main couple). But iAm and Maichen together were probably my favorite parts. Their relationship was so raw and I loved that iAm was a virgin and saving himself. I loved following their storyline and how the other Shadows came into it but I sincerely wish they had more on-screen time because their story was majorly underdeveloped.

That brings me to s’Ex. Good Lord that man is a GOD. I couldn’t get enough of him and even though he’s a bit of a whore (seems worse than Rhage was!!), he had a very honorable heart, though. It’s horrible what happens to him and I’m glad he got a little bit of justice but I wish that justice was on page instead of just told about. And I hope that something good happens to him soon because he deserves an HEA!!

Now, this is the part of the story I hated. LAYLA. OMG, I hate this female. She plays the victim like no one else but it’s HER that’s causing all the issues. She kept demanding Xcor to take her and then when he tries to she freaks out and acts like he’s about to rape her. Her obsession with Xcor leads him to finding out where she stays putting ALL of the brotherhood in danger and it’s HIS fault? Are you kidding me? This female needs to take responsibility for her actions and STOP blaming everyone for the decisions SHE makes. I couldn’t stand her scenes and honestly wish she would just go away. Xcor deserves someone else and Qhuinn and Blay deserve to focus on THEMSELVES and NOT that selfish bitch.

3 stars for the story.

Nikyta’s Review – Audio Book: Jim Frangione was a little odd in this one. After 12 books, he started pronouncing words differently. It made me wonder how Penguin didn’t catch either the words not being pronounced properly way from the beginning or the fact that Mr. Frangione wasn’t keeping consistency with his narration in this one (isn’t there an equivalent of a line editor for audiobooks??). Aside from that, there were some parts that were dull but I believe that’s more because of the story than him. I still found him to be an engaging narrator and he knew the exact tone to have in moments of suspense that would keep me reading.

4 stars for the audio.

Susan65’s Review – Book: With this reread, via audio book, I was unsure of Trez and iAm and left wondering if I would still find them to be so amazing; yes, I really did ended up loving them both. They were, in many way, a repeat of the Phury and Zsadist story-line, wherein one brother devoted his life to the other and remained celibate. The similarities end there, but the premise was very familiar. The prologue gives the reader everything needed to know that they were in for a good story. Just as I know many people will hate the ending, which I still don’t think was wrong either, as it’s just the way it was supposed to be…and I accept that. But still…so sad.

Trez and Selena have one of the most romantic relationships in this series. Their whirlwind love affair and tremendous sex life was the stuff of fairy tales. I loved nearly every minute of their courtship, and I found myself dreading where it was going even though I knew how it ended. The love Trez and Selena had for one another was only rivaled by the brotherly love between Trez and iAm. I became a huge fan of the Shadows, well maybe just a few of them, and can’t wait to catch up with them in future books.

iAm had a huge role in this installment, but his love story seemed almost secondary compared to Trez’s. I thoroughly enjoyed all the plot twists that came into play which were necessary to settle the issue of Trez being forced into the role of the Anointed One. It wasn’t a huge surprise to see how it played out, but it was still interesting. I liked Catra okay, but she was kind of stale and boring, even if she did rock iAm’s world. However, the scene with the guys in iAm’s restaurant discussing Selena with Catra was so sweet, so bittersweet.

s’Ex is one of my new favorite characters. My heart really broke for the male, again, and I honestly dreaded listening to his parts and I found myself wishing him his own book. He might not be a major player in the grand scheme of things, but he is definitely a high quality secondary character. Much more entertaining than Assail, in my opinion. I just wish the final showdown between the Queen and s’Ex was on page. It would have been amazing to see her finally get her just desserts, especially at his mighty hand.

Rhage has many issues that still need to be worked out, and I am sure we get to the bottom of his pain in the next book, his book, The Beast. He is a favorite Brother of mine, and I can’t stand the idea of him conflicted. Guess we will have to wait a little longer to find out, but I am excited to see how it plays out.

What I was so looking forward to, and severely missed, was the Qhuinn and Blay continuation. They so deserve some alone time , on page, and a mating ceremony for two…just two, not three. Blay waited long enough to get Qhuinn and having to share him is so not sexy, no matter how honorable Blay may be. What we get in this book is a threesome with Layla. I have no idea why the author couldn’t write a gay couple without a female playing such a prominent role, but it drives me bonkers. Not once was there a scene between just the two males, it was always with Layla, and that was just not acceptable to me. I find myself disliking the Chosen Layla just because she forced herself into their relationship and now with their young on the way, I don’t see that changing…and it makes me sad.

And Layla basically forces herself onto Xcor,  makes him an offer he can’t refuse and herself a victim, but blames him. Nothing will make me cheer louder than for her to finally be forced to take responsibility for her own actions. Qhuinn was held accountable when she begged him to service her, and now, I’m sure Xcor will be 100% at fault for Layla’s actions, again. Kinda makes me wish the “arrest” would befall our fallen Chosen. I know many love the girl, but I am not one of them.

Throe turned into a real bastard and Xcor gets a conscience. Who knew? I loved Xcor, I have always loved a male with a disability and even though his issue is physically minor, with his scarred and deformed face, I found my heart breaking every time he overheard someone call him ugly. The emotional pain he has dealt with his entire life is horrific and heartbreaking and unfair. I adore him and can’t wait for him to finally get his chance with Layla, even if I would have chosen another for him.

Susan65’s Review – Audio Book: Oh, Jim Frangione, what happened? Your pronunciations have changed, your voices all sound the same, and I had to speed the audio up to 1.25 to 1.5 to stop myself from falling asleep. Something happened from the earlier books to this one, and I’m hoping that The Beast has an audio editor before it goes out to the public. I don’t think I can handle the Primale being pronounced like an Italian pasta dish anymore.

*We purchased our own, personal copies of this book for review.*