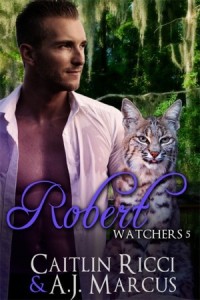 Blurb:  Running down the Florida beaches to stay ahead of trouble, Robert and Lance find a connection Robert never desired, but doesn’t want to let go of.

Robert isn’t sure how he feels about all the changes happening to the other Watchers. He has always believed in Watchers staying detached from the shifters they oversee, but that was before he had a little too much sushi and way too much sake and woke up married to Lance, a really sexy raccoon shifter.
Before he can sort out exactly what happened, the two find themselves mixed up in a mess with a tiger shifter who is part of a group of Russian shifters up to no good. While Robert tries to sort out the situation, Lance is focused on diverting Robert’s attention to him in the most sexual way possible.
Running down the Florida beaches to stay ahead of trouble, Robert and Lance find a connection Robert never envisioned, but doesn’t want to let go of.

Review: From the previous books (which I recommend you read before reading this), we know there are Watchers who get involved in the lives of other shifters who are in trouble. The group is slowly expanding as the previously never-mated Watchers begin to find mates.

Robert (aka Bob the Bobcat) is in Florida. He likes being a lazy Watcher and having lots of random sex.

He meets a guy in the bathhouse who gives him a run for his money but ends up drunk and married and involved in a crazy scheme to find a Russian tiger’s ring.

Like the others in this series, this is a quick little morsel of shifter shenanigans and hot smexy times.

Robert and Lance don’t have much of a connection beyond the sexual (Lance is REALLY hard to like and really the same can be said for Robert) but the story is pretty cute about how they rescue the ring.