Audio Review: There’s Something About Ari 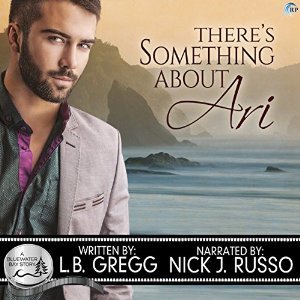 ADHD poster-child Ari Valentine left for Hollywood and lost everything, including his bad reputation. Then the breakthrough role of his skyrocketing career lands him back in Bluewater Bay, to the stunned disbelief of, well, everyone. But there’s only one person Ari longs to impress—the only person who ever really mattered to him, the person he left behind: Buck Ellis.

Review – Book: We start out meeting Buck and Ari at their first meeting in elementary school. Buck – slightly outcast, overweight, “other”, lonely – and Ari – new kid, hyperactive, petite and friendly to everyone. They form an instant bond that sticks with them all through high school until suddenly, just when Buck’s life is falling down around his ears, Ari leaves town for Hollywood not to be heard from for the next 5 years.

As the story progresses, we learn that Buck has fought the attraction he felt for his best friend for years and never voiced it aloud. He’s crushed when Ari abandons him and is unwilling to just let bygones be bygones when Ari suddenly returns as his new neighbor.

Ari, meanwhile, has grown up and found himself in a lucrative acting career. He’s ready to come home and wants to be back in Buck’s life.

This book was a solid 5 star read for me up until the ending. Unfortunately, I’ve found this to be true with several of the author’s books. It’s like once the couple has even a hint that things might be on the path of happiness, the story ends. It feels like slamming into a brick wall!

There is no way this feels like a resolved story to me. Yes, the boys are in a good place, and yes it feels like it might be “forever,” but we just spent all this time with them apart and just as we get a glimpse of “happy” – BAM – the story’s over.

Sure, I found the writing to be engaging and well done – Buck is a fun character and I loved being in his head at times! – but I also wished we’d seen a bit more from Ari. He’s barely a character as this is so much a Buck story and less a Buck and Ari story.

In any case… there was much to like about this story but I really wish there’d been more to the ending.

Impression – Book:   I liked it

Review – Audio:  I picked up the audio because Nick J Russo is one of my favorite narrators and I couldn’t wait to see how he could help this story along for me. I was right. I definitely felt better about the story after listening to it because he adds so much to the overall experience. I love his take on emotions and when things are funny he’s at his best.

I highly recommend his narrations and he did a great job with this one.

Impression – Audio:  It was amazing