Posted on September 6, 2016 by thebloggergirls 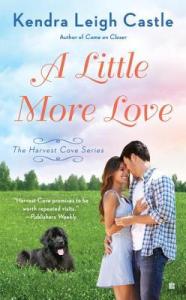 Blurb:  For fans of Jill Shalvis and Kristan Higgins, a sweet, small-town romance about writing your own happy ending…

Kira Andersen’s professional instinct for a story has never led her wrong. So when she learns of a famous writer hiding in plain sight in a tiny New England town, she can’t resist following the trail. The only problem is everyone in Harvest Cove seems intent on keeping her from tracking down the elusive author—especially a handsome distraction who’s making it very hard to focus on the job…

Henry “Fitz” Fitzroy has no intention of letting a nosy reporter uncover his alter-ego as superstar writer Malcom Roy. Only Kira’s persistence is hard to deny—as is his own attraction to her. The more time he spends with her, the more he discovers he’d give almost anything to keep her in his life. But as work and play become inexorably entwined for Kira and Fitz, they realize that getting what they want for their careers might mean losing everything their hearts desire…

Review: Oh, how I adore this series!! Ever since I read the first book, two years ago, I was charmed with the lovely fictional town of Harvest Cove, along with their residents that Ms. Leigh Castle created. I followed their romances and overjoyed with the happily ever afters. It is a little bittersweet that this book, A Little More Love, is the end of this lovely series. There will be no more Harvest Cove books, and Ms. Leigh Castle herself says that she might not return to contemporary romance for a while.

Anyway, A Little More Love, features Kira Andersen and Henry “Fitz” Fitzroy. Kira is the twin sister of Seth Andersen, the hero of book #2. While Fitz is a good friend of Jake (hero of book #1) and Shane (hero of book #4). The major conflict for this couple is the fact that Fitz has a ‘secret identity’. He is actually Malcolm Roy, an elusive fantasy author with a movie and TV series made out of his books.

Meanwhile, Kira is on the job trying to score an interview with Malcom – which will do so much for her career. She was burned in the past when her ex-lover stole an important position from her; she left her job and temporarily moved back to his job. So what would happened if Kira found out that Fitz was keeping a huge secret?

First of all, let me say that Fitz was ADORABLE!! Seriously!! That guy is a Beta-Male … he used to be painfully shy as a kid – especially because of his background, he often felt displaced. He bumbled through flirting, getting nervous around Kira. He was just … argh, making me want to squish his cheeks and hug him or something. Which is probably creepy because I am not much older than he was *lol*. Oh, I will just act like I am his big sister. I am entitled that way.

It was refreshing for me, a nice change of scenery from the usual Alpha confident men who walk through the room like they own it. Fitz even admitted to himself that he was a geek.

He played games a lot, he had sword collections … he had a rather questionable taste for sweaters *lol*. But hey, Fitz was also a successful author, so he ROCKED my socks off.

Kira was lovely too … I loved that she was able to coax Fitz out of his shell. I loved that Kira made Fitz comfortable around her. She was charming – even if she could be a little guarded when it came to her ‘failure’. Oh, and she was also good in gaming, and totally loved reading fantasy books too. So yeah, Kira was an awesome heroine of her own. They were totally perfect for one another. Reading about them made my heart soar with joy.

Which was why I was a little bit disappointed that Kira and Fitz didn’t spend more time together as much as I wanted them to be. This being the last book in the series, various characters from previous books appeared quite frequently. While they didn’t totally steal the spotlight, I felt like Kira and Fitz also spent time more with them rather than together. Kira, most especially with her brother, Seth, and soon-to-be sister-in-law Emma. And Fitz with his friends Shane and Jake, or sometimes with his amusing huge Newfoundland, Norm.

But overall, I enjoyed this book. The epilogue felt like a great closure where everything came together for our couples, like a Christmas present with a gorgeous bow. What a satisfactory way to end a series. Thank you for giving a fan Harvest Cove, Ms. Leigh Castle 🙂