To Love & Protect His Omega by Quinn Michaels: Exclusive Excerpt!

Exclusive Excerpt from To Love & Protect His Omega

Gunnar fiddled with his wedding ring as he took a step towards the table. That simple motion wiped any thoughts of scents or biology class from Liam’s mind. The way he was acting, he was proving the omega detractors, the ones who said omegas couldn’t be trusted with important work because their hormones would get the better of them, right.

Puff lifted his head, and his meow was stronger this time. He even moved his paws, scraping a pad lightly over the towel.

Liam smiled. He glanced up at the fluid bag. A bubble had begun to form under the skin of Puffs flank from the fluid. Another 10 mL would be enough for now.

“He looks better, doesn’t he?” Gunnar asked. “What’s wrong with him? What did you do?”

Liam pinched the line and pulled the needle out as he explained about the low blood sugar and everything he had done so far. “A normal kitten will usually eat one to two full 5 1/2 ounce cans of cat food over the course of the day. Or an equivalent amount of dry. It’s usually best to do a little of both.”

“That much?” Gunnar fiddled with his wedding ring again. “I didn’t know.”  He took another step so that he was catty-corner to Liam. Puff squirmed a little on the towel and sneezed. Gunnar reached out and then stopped. “Can I touch him?”

Having an alpha so close should have scared Liam, but Gunnar was so gentle with Puff that Liam felt calm too. Damon had pretended to like Liam’s pets, but he had rarely tried to touch them. And the feeling had been mutual. Ferrous, who liked most everyone, had given Damon a disdainful hiss and stalked off, tail twitching. Liam should’ve known then.

“You can pet him. Of course. He’s going to get a bit more active in a few minutes, but we have to get some real food into him. Dextrose is a simple sugar, and easy to absorb, but once he is strong enough to swallow, we’re going to have to hand feed him. I’d like to keep Puff for the day, just to get him off on the right foot, if that’s okay.”

“Yes, please.” Gunnar petted the kitten gently. “Do you think he’s going to…? I know you can’t say for sure, but he’s looking better, isn’t he?”

“I can’t say for sure, but it’s clear this little guy is a fighter. And I’m going to do everything I possibly can to make sure Puff stays with us. My cat, Ferrous, was in a similar place when I took him home, and now he’s so chubby, it’s embarrassing when I tell people I’m a vet.”

Gunnar laughed, and for a moment the grimness lifted from his expression and Liam’s breath caught in his throat. Gunnar’s omega was a very lucky man.

“Can my daughter see him?” Gunnar asked.

“Absolutely. I’ll have Carolyn mix up some – –.” A bowl of diluted prescription cat food and a syringe were already sitting on the table. “Thanks, Carolyn,” Liam said.

Carolyn was already setting up a cage for Puff to spend the day and be monitored. She was going to be an excellent veterinarian. She was detail oriented, intelligent, and kind. Liam really loved working here. Back home, he had worked in an emergency clinic, and while he loved knowing that his split-second decisions could and would immediately save lives, he never really got a chance to know the clients or patients beyond the duration of their emergency. Here, he could build longer-term relationships. As lonely as he was being so far from everything he had known before, he liked this. And more importantly, he was safe.

“I’ll be right back,” Gunnar said.

Liam breathed a soft sigh through his nose after the alpha had left. The attraction was biology. Even if Liam had wanted to act on it, which he didn’t, the man was married, and he had a kid.

About To Love & Protect His Omega 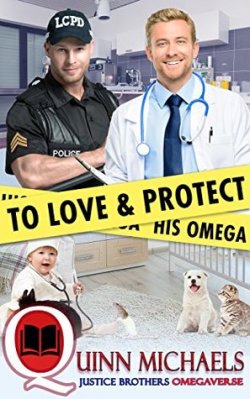 Gunnar swore to serve and protect, but he couldn’t save the omega he loved. Will a sick kitten give him a second chance at love?

Police Detective and single dad, Gunnar Justice swore an oath to serve and protect, but he couldn’t save the omega closest to him. Now he’s raising his 8-year-old daughter alone. But when his daughter adopts a sick kitten, will a hot veterinarian with his own secrets offer a second chance at love?

Pursued by a relentless stalker, omega veterinarian, Liam Chandler, packs up his entire life and moves across the country to start over. He has lost faith in romance and instead devotes his time to saving his animal patients. But when a handsome alpha detective and his daughter come into Liam’s exam room with a kitten who needs a miracle, will Liam give romance a second chance?

Can these two men overcome their pasts to make a family together? Even as a final threat from Liam’s past threatens not only their relationship but their lives.

To Love and Protect His Omega is a single dad Omegaverse romance with mystery, action and all of the feels.

If you love Omegaverse m/m romance that keeps you turning pages into the wee hours of the morning, start reading To Love and Protect now!

Don’t forget to check out Nikyta’s review of To Love & Protect His Omega to see what she thought of it!

From Quinn: I love fantasy, werewolves and M/M omegaverse romance! My goal is to write action-packed adventures of romance, self-discovery and second chances, all served up with a hefty helping of sweet, sexy Omegas and hot, determined Alphas who will do anything to cherish, love, and protect them. It’s so exciting to be able to share my characters and worlds with you, and I hope you enjoy them (and the sexytimes!)