Posted on April 7, 2019 by thebloggergirls

“May I ask why you’re making a huge scene in the front of Mr. Manos’ house?” He wasn’t being kind to her, but she didn’t seem to care. She batted her eyes.

“Well, Billy, you see, I need to speak with one of the Manos men. My lovely Pixie is in quite a state and it’s all that Buck’s fault.”

Oh lord above, that dog was going to be the death of me.

“Well, I’ll be glad to help you if you can explain the situation.”

She nodded, clearly pleased she had his attention. “Yes, I asked Donald here if I could enter, but he said no, and that’s very rude.” She gave an unaffected Donny the stink eye.

“You have to understand why, Mrs. Markle. You’re hollering at the gate.”

“Yes, well, my Pixie just got back from the vet and she’s pregnant!” she screeched, and that was it. I couldn’t sit there.

“Now, you hold on a second, Mrs. Markle,” I said as I stepped out of the car. Ignoring Bill’s goddammit or Donny’s oh god, I got right up in her face. “Your French poodle is a little slut! She’s been shaking her fluffy ass all over the street. I saw her last week getting her ass tackled by Mr. Ryder’s bulldog, so don’t come here and blame Buck.”

“Why you little…” Yeah, Mrs. Markle went for my neck.

“No!” Bill shouted and stepped between us. “Mrs. Markle, there’s no way of knowing if Buck is the daddy.” That comment earned him a chuckle from Donny. “After the birth, we can all sit down and figure it out.”

“And what about her bills until she delivers?”

“If Buck is the father, then we’ll pay fifty percent after she delivers. But do yourself a favor and get your hussy of a dog fixed,” I snapped, and she began screaming again. “Open the gate, Donny, I’m done with the Poodle Madam.” 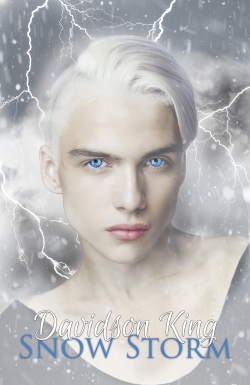 The city of Haven Hart rests under the heel of Christopher Manos. He reigns over the most dangerous and deadliest citizens as the most powerful crime boss the city has seen in generations. Yet, for the last five years, the harshest edges of his nature have been tempered by the loving devotion of his husband, Snow, and the nephew Christopher adores like a son. His life is a balance of darkness and light until a birthday trip for his nephew, Simon, is interrupted by a hail of bullets and explosions, threatening to destroy it all.

Snow has found a home, a family, and the love of one of Haven Hart’s most powerful men. When Christopher and Simon are kidnapped, Snow risks everything to find his family. Utilizing specialized skills he learned on the streets and the finer points of running a city from his crime boss husband, Snow takes on roles he never dreamed he would–protector, leader, and avenger. No one threatens his family and lives. Experienced enough to know he can’t do this alone, Snow calls in every favor he is owed, risking his life promising favors in return, all to save his family and the man he loves.

The sins of the Manos crime family are escaping the dark recesses of the past and threatening the bright future of everything Snow and Christopher have built. Yet, even with the help of some unlikely and uniquely dangerous people, Snow finds himself wondering if their efforts will be enough to save the two most important people in his life. Will the loving family Snow has finally found be taken from him forever?

Davidson King, always had a hope that someday her daydreams would become real-life stories. As a child, you would often find her in her own world, thinking up the most insane situations. It may have taken her awhile, but she made her dream come true with her first published work, Snow Falling.

When she’s not writing you can find her blogging away on Diverse Reader, her review and promotional site. She managed to wrangle herself a husband who matched her crazy and they hatched three wonderful children.

If you were to ask her what gave her the courage to finally publish, she’d tell you it was her amazing family and friends. Support is vital in all things and when you’re afraid of your dreams, it will be your cheering section that will lift you up.

As part of this blog tour, Davidson is giving away a $10 Amazon Gift Card!! To enter, just click the link below!

Don’t forget to check out Nikyta’s review of Snow Storm to see what she thought of it!