Blurb: When life gives Kuro Jenkins lemons, he wants to make ponzu to serve at his Los Angeles ramen shop.

Instead he’s dodging bullets and wondering how the hell he ended up back in the Black Ops lifestyle he left behind him. After rescuing former child star Trey Bishop from a pair of thugs in the middle of the night, he knows it’s time to pick up his gun again. But it seems trouble isn’t done with Trey, and Kuro can’t quite let go… of either the gun or Trey Bishop.

Trey Bishop never denied his life’s downward spiral was his own fault. After a few stints in rehab, he’s finally shaken off his Hollywood bad-boy lifestyle but not his reputation. The destruction of his acting career and his relationships goes deep, and no one trusts anything he says, including the LAPD. When two men dragging a dead body spot him on a late-night run and try to murder him, Trey is grateful for the tall, dark, and deadly ramen shop owner he lusts over—not just for rescuing him, but also for believing him.

Now caught in a web of murders and lies, Trey knows someone wants him dead, and the only one on his side is a man with deep, dark secrets. Trey hopes Kuro Jenkins will stick around to see what the future holds for them once the dust settles, but from the looks of things, neither of them may survive to find out. END_OF_DOCUMENT_TOKEN_TO_BE_REPLACED

Blurb: When long-time theatrical enemies are cast as lovers, their late-night rehearsal brings a whole new meaning to method acting.

For twenty years, Adam Fisher and Thomas Fox have been the best of enemies. From their first meeting at drama school to shared stages, shared bills and a competition to amass the most illustrious awards, they have been the names on every theatregoers’ lips. Separately they can sell out an entire run in an hour, so when they’re cast as lovers in London’s hottest new play, the tickets are gone in minutes.

But for rakish Adam and gentlemanly Thomas, the small matter of their first on-stage kiss is causing a headache for everyone. Over a bottle of wine on one rainy night in the city, these two acting legends will do whatever it takes to banish their first-night nerves. After all, as everyone knows, the show must go on!

END_OF_DOCUMENT_TOKEN_TO_BE_REPLACED

Blurb: DecemberCon 2017. John Perlan, aka YouTuber “SmileyNibor,” has come to the con for one reason and one reason only: to see his idol, actor Derek Kitow. And since Derek has announced he’ll be dressed as the original Aquaman, Perlan decides to come as the Aquaman reboot. It helps that he already has the beard and the bod to make a convincing Momoaman.

But when Derek Kitow makes his entrance, he recognizes Perlan from his tiny YouTube channel and wants him onstage! Has Kitow been following him online? Could SmileyNibor’s hero also be a fan? And what exactly does Kitow have in mind by inviting Perlan to meet him after the panel? END_OF_DOCUMENT_TOKEN_TO_BE_REPLACED

Pete is in a rut, though, and he knows it. And what’s worse, his boss knows it. If he can’t reignite his passion for the biz, he’s going to have trouble paying his none-too-cheap college tuition.

Posted on September 11, 2016 by thebloggergirls

To the average person, celebrities seem to have it all—money, fame, and droves of adoring fans lining up to fawn over them. But a life in the public eye can make romance challenging, and deep down, these guys are looking for the same thing as any other man: someone to share a steamy tryst with between acts or to ride off into the sunset with after the curtain has gone down. Luckily there are those willing to love the men behind the billboards and on-air personalities, and they’re looking for a private performance from their favorite drag queens, musicians, reality TV stars, actors, rodeo champions, and video game designers. Even superheroes and legendary defenders. Money and fame might not always equal happiness, but these celebrities will leave stars in their lovers’ eyes.
END_OF_DOCUMENT_TOKEN_TO_BE_REPLACED

Blurb: Hollywood is full of dirty secrets, but Carter refuses to be Levi’s.

Retired action star Levi Pritchard has made a quiet life for himself in the sleepy logging town of Bluewater Bay, Washington. But then Hollywood comes to film the wildly popular television series Wolf’s Landing, and Bluewater Bay isn’t so sleepy anymore. His retirement doesn’t stick, either, because he’s offered a part on the show-exactly the kind of complex role he’d always wanted, one that would prove him more than a glorified stuntman. The only catch? He has to stay in the closet-no matter how attractive he finds his costar.

Carter Samuels is the critically acclaimed male lead on Wolf’s Landing. And now, the man who inspired him to take up acting-and made him realize he’s gay-is joining the cast, and sparks fly between them instantly. But Carter is out and proud and determined to stay true to himself.

Remaining just friends is the only thing to do, as both the studio and Levi’s disapproving, dysfunctional family keep reminding them. Except their friendship deepens by the day, tempting them with what they can’t have but both desperately need.
END_OF_DOCUMENT_TOKEN_TO_BE_REPLACED

Book Review: The Last Nights of the Frangipani Hotel by Bey Deckard 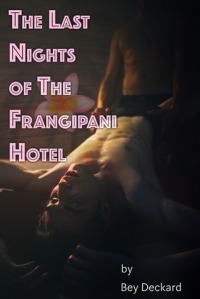 Blurb:  All James wanted was a little solitude at his favourite resort: bright sunshine overhead, soft, white sand underfoot, and a hammock to read in while the warm breeze rustles through the coconut palms and almond trees. However, when an old acquaintance shows up, and James is obliged to share “his” beach, a profound exchange over a bottle of rum leads to a lust-fuelled encounter in the dark.

Reeling from the intensity of the drunken tryst, James decides to cut his vacation short rather than face what he’s kept hidden under mountains of denial.

However, his escape is thwarted when Rudie, handsome and plainspoken, calls him out on his behaviour and makes him see that life needn’t be spent running away from his desires.

Set at a rundown old resort on a small Caribbean island, The Last Nights of The Frangipani Hotel is a story about letting go of fear and learning that passion and love can be found in the most unexpected of places.
END_OF_DOCUMENT_TOKEN_TO_BE_REPLACED

Posted on August 16, 2015 by thebloggergirls

Blurb:  Andy Marshall moves to London looking for a fresh start after breaking up with his long-term boyfriend. To stave off boredom from his day job as an accountant and to meet new people, Andy joins a local amateur dramatics society called the Sarky Players based in Greenwich, South London. Despite his best efforts to avoid it, Andy is cast as one of the leads in a truly dreadful play called Whoops, Vicar, There Goes My Trousers, written by a local playwright.

The play might be bad, but the Sarky Players are a friendly bunch. Andy quickly makes new friends and finds himself attracted to Phil Cormack, a local artist helping with the props. But life doesn’t run to a script, so Andy and Phil will have to work hard to improvise their own happy ending.
END_OF_DOCUMENT_TOKEN_TO_BE_REPLACED

Posted on August 2, 2015 by thebloggergirls

Blurb:  Sullivan Lake, Vermont, has plenty of attractions for movie star Ashley Carlsen—pristine nature, local color, and a handyman with a bad reputation for all the right reasons…

Ashley’s movie-star life is starting to feel like an act. She’s desperate to be taken seriously, and after her boyfriend’s affair with a costar, she’s ready for a new scene. A vacation at Sullivan Lake with Hollywood power player Jasmine McArthur might be the answer to all her problems. And according to Jasmine, all Ashley needs is a hot summer fling with local stud Josh Sullivan.

After one look at the handsome handyman, Ashley has a hard time saying no. But Josh is tired of playing boy toy for rich women like Jasmine and her friends. As determined as he is to stay away, he can’t shake the feeling that Ashley is different—and he can’t help noticing her auburn hair and dancing green eyes. But when their budding romance hits the tabloids, will it be another Hollywood scandal, or happily ever after?
END_OF_DOCUMENT_TOKEN_TO_BE_REPLACED

ADHD poster-child Ari Valentine left for Hollywood and lost everything, including his bad reputation. Then the breakthrough role of his skyrocketing career lands him back in Bluewater Bay, to the stunned disbelief of, well, everyone. But there’s only one person Ari longs to impress—the only person who ever really mattered to him, the person he left behind: Buck Ellis.
END_OF_DOCUMENT_TOKEN_TO_BE_REPLACED